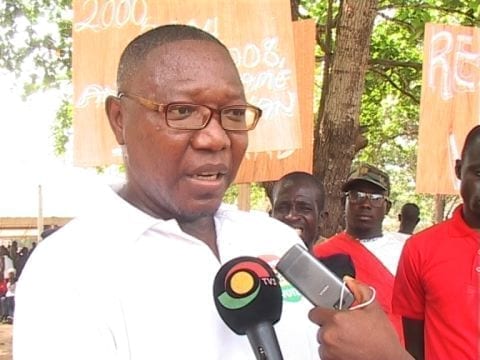 Builsa South MP, Dr Clement Apaak has said that contrary to a disclosure by the Minister of Food and Agriculture, Dr Owusu Afriyie Akoto, on the floor of Parliament, that fertilizer distribution in the northern sector has improved following an emergency meeting between suppliers and the ministry, Builsa South is yet to receive a single bag of any kind of subsidized fertilizer as at now.

Could it be the case that Builsa South has been blacklisted? he asked.

“If that is the case, the people of Builsa South deserve to know in fine detail the reasons for the blacklisting which is threatening their source of livelihood,” he said.

” The exorbitant cost of fertilizer in the market and unavailability of subsidized fertilizer has compelled most smallholder farmers to cut down the number of acreages they intended to farm this year.

Below is his fill statement…

SHORTAGE OF SUBSIDIZED FERTILIZER IN BUILSA SOUTH, IMPLICATIONS AND CONSEQUENCES FOR GHANA

As a representative of the people of Builsa South which is predominantly a farming district, I have been inundated and in fact overwhelmed, with calls from farmers in my constituency about the acute shortage of fertilizer since this years’ crop season begun.

Farmers who invested heavily in farming activities in anticipation that government through Planting for Food and Jobs will supply fertilizers at subsidized prices have already started counting their losses as their crops turn pale and yellowish on their farms due to the unavailability of fertilizer.

The period when the crops need the fertilizers to help promote growth has elapsed and the one to promote good yield is almost elapsing but subsidized fertilizers are nowhere in sight in Builsa South.

Contrary to the disclosure by the sector Minister of Agriculture, Dr Owusu Afriyie Akoto, on the floor of Parliament, that fertilizer distribution in the northern sector has improved following an emergency meeting between suppliers and the ministry, Builsa South is yet to receive a single bag of any kind of subsidized fertilizer as at now. Could it be the case that Builsa South has been blacklisted? If that is the case, the people of Builsa South deserve to know in fine detail the reasons for the blacklisting which is threatening their source of livelihood.

The shortage of subsidized fertilizer is going to increase the cost of production of farmers, especially smallholder farmers who do not have the muscle to compete with large scale farmers. This means that constituents of Builsa South, and similar constituencies, largely smallholder or peasant farmers, are going to be hit harder.

On the average, agronomists say, an acre of maize or rice requires two 50kg bags of NPK and 50kg of ammonia, which cost between 190 cedis and 200 cedis on the market. Just imagine the financial burden on a peasant farmer who cultivates about 10 to 15 acres of maize and 10 to 15 acres of rice, and needs to buy fertilizers at the market prices. For every 10 acres, a peasant farmer needs 20 bags of NPK and 10 bags of ammonia. When you do the calculations of the market price, a peasant farmer would have to cough up between 3,800 cedis and 4,000 cedis for NPK, and an amount of between 3,000 cedis and 3,400 cedis for Urea or Ammonia at the prevailing market prices for every 10 acres.

For peasant farmers in Builsa South and other rural communities who cannot afford fertilizers at the market price, their crops are bound to yield poorly. This has the propensity to cause hunger and poverty among peasant farmers this year. Employment for those in the agricultural value chain especially ‘aggregators’ would be negatively impacted. Since farmers do not have enough to feed, they would not consider selling some of the produce. This means aggregators’ businesses would suffer a great deal. The above situation will certainly contribute to unemployment and poverty. Another consequence of all this is the increase in rural-urban migration as more young men and women will troop to urban areas to enhance thier survival. In other words, we can expect more ‘kayayee’, scrap collectors and truck pushers in the cities.

The impending poor crop yield will impact the economy in adverse ways. It will worsen the already existing food supply deficit and further burden the import bill of the state. This will affect balance of payment and the wobbly stability of the cedi.

In all of this, government cannot be absolved from blame for the shortage of fertilizer across the country. In abnormal times like these, governments over the world have been proactive especially in matters relating to food security. Government ought to have anticipated the impact of COVID-19 on every sphere of life and ought to have planed ahead of time.

What is shocking is how trucks carrying hundreds of bags of fertilizers can cross our land borders which have been supposedly closed since the onset of COVID-19. Clearly, donkey carts alone cannot be responsible for the quantum of fertilizers smuggled across our borders. The inability or refusal by the security agencies and government to crackdown on the activities of smugglers is not a mark of incompetence but reveals complicity on the part of government officials.

If not that, how can the Minister of Agriculture with all powers vested in him throw his hands in despair over donkeys carting fertilizers across our borders when trucks move hundreds of fertilizers bags across closed borders from fertilizers depots; where there are records and documents on which suppliers and distributors were/are given what quantities for specific destinations.

It is sad that NaBCo recruits are being used as scapegoats in the fertilizer smuggling syndicates. These recruits are just errand boys of those they work under. A serious investigation by the police or NIB will reveal the hidden big personalities behind the smuggling and hoarding syndicates, but will it ever be done?

In early June this year, Upper West Regional Minister, Dr Hafiz Bin Salih, lamented that over 45 rhino trucks, not donkey carts, each carrying 300 bags of subsidized fertilizer valued at GHS1,602,000 had been smuggled out of the country to Burkina Faso through the Sissala West District. What investigations have been conducted into this? Who is being prosecuted?

The shortage of fertilizers ought to be treated as a national emergency and prompt attention should be given it. The farming season and for that matter the right time for fertilizer application would not wait for us.

Let me conclude by reminding the Minister for Agriculture that Builsa South is still waiting for fertilizer under the Planting for Food and Jobs programme in this crop season. Yes, many farmers are already counting thier losses, but, should the fertilizer get to Builsa South immediately, the situation could be ameliorated. The consequences of a lost farming season will not be borne by the people of Builsa South alone but Ghana as a whole.