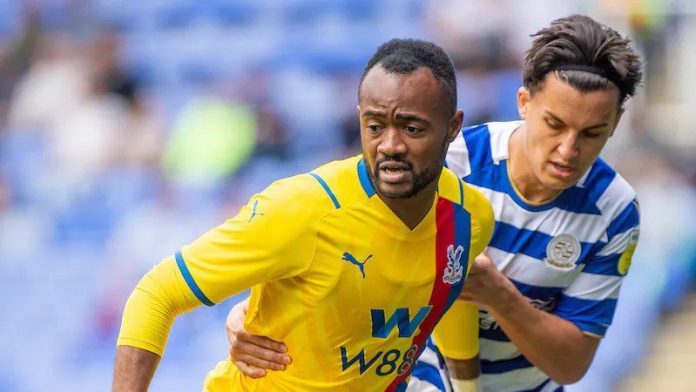 Black Stars striker Jordan Ayew netted his first goal in pre-season on Saturday and it helped Crystal Palace secure an impressive win over Reading FC despite the Eagles playing majority of the match with 10 men.

Senegal captain Cheikhou Kouyate was shown a straight red card in the 30th minute, but Palace were able to go on and win their third pre-season friendly this summer with a 3-1 triumph over Reading FC at the Select Car Leasing Stadium.

Ayew’s goal gave Palace the lead for the second time, with the first having lasted for 14 minutes, before Scott Banks sealed victory with the third goal deep into stoppage time.

The Ghanaian, after receiving a pass from youngster Conor Gallagher, was able to run at the Reading goal before hitting a low shot past goalkeeper that went in via a slight deflection.

The goal is his first under manager Patrick Vieira who has succeeded Ayew’s ‘favourite’ Roy Hodgson.

Ayew spoke highly of the Academy youngsters after the match. According to him, the players demonstrates the positive direction of the club.

“It’s not easy, because I’m not used to that,” Ayew admitted of playing with the young Eagles. “But that shows the club is moving in a different direction and its positive. They’re doing really well, and I’m pleased for them.

“I’m pleased for them and as well for the club because it shows that we’re moving in the right direction.”

“It’s different, because the gaffer came in and had a different style of play and wanted me to have more control of the game, and asked to create a lot of chances.

“He’s trying to keep me high up the pitch, so I have lots of energy. Obviously me, Wilf [Zaha], Christian [Benteke], JP [Mateta] and [Jeff] Schluppy are just trying to put in the best conditions for us to make the difference up front.

“It was a good one for the team because the second-half was not easy. We defended well. There is a lot of positives – the young guys are performing and everything is going to plan.”

Ayew is hoping to impress in the new season, after a disappointing 2020/21 campaign in which he scored just goal.