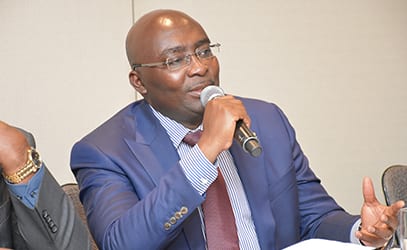 The 2020 Presidential independent candidate Mr. Kofi Koranteng has censured Vice President Dr Mahamadu Bawumia for ascribing the sluggish growth of Ghana’s economy to the manipulation of ‘demons’ and ‘principalities’.

He has described the head of Ghana’s economic team as incompetent who is incapable of solving the economic crises in the country.

Dr. Bawumia is said to have stated that there are ‘demons’ and ‘principalities’ working to impede the growth of Ghana’s economy when speaking at the 13th Congregation of University of Professional Studies, Accra (UPSA).

Kofi Koranteng reacting to the vice president’s comment on Makye show on Onua TV on Tuesday August, 3 maintained that Dr. Bawumia is not competent, not functional and has no love for Ghana hence blaming demons for government’s inability to fix the economy.

He has thus asked him to resign as Vice President and allow Reverend Christian Kwabena Andrews, founder and leader of Ghana Union Movement (GUM) to replace him to help fight the demons spiritually.

“If you say that it is ‘demons’ and ‘principalities’ that are impeding the growth of the economy and the overall development of the country then kindly step down and allow Kyere Abosom to replace you because he is known to be capable of fighting demons”.

He however indicated that the political leadership in Ghana is a failure and the devil has no time for the country because the leaders are already working for the devil.

Kofi Koraneng vowed vehemently to participate in the forthcoming Fix The Country demonstration and entreated the youth to turn up in their numbers to help send a strong signal to the government that Ghana needs to be fixed.

Why Kofi Koranteng thinks Ghanaian leaders should not be blamed again