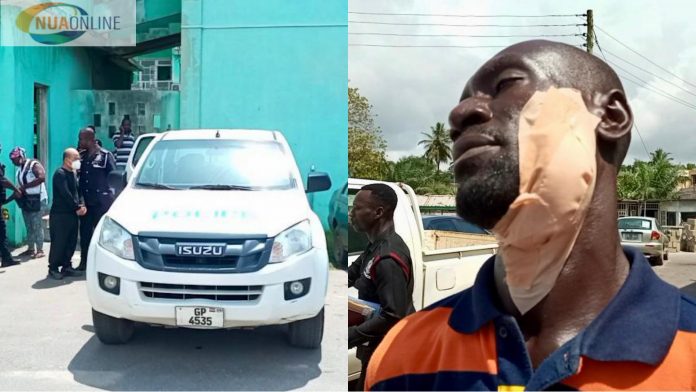 The Sekondi District Court presided over by Her Worship Nana Abena Asoh Owusu Omenyo has refused a bail application for Manager of Poly Changda Engineering Company Xue Hui who has been accused of attempting to murder his employee with a flip knife.

According to the presiding judge it is only a trial court that can grant the accused person bail.

Presenting the fact of the case to the court, Chief Prosecutor Superintendent Steve Addom said the accused person is a Chinese National Xue Hui and manager of Poly Changda Engineering Company based in Takoradi while the complainant, Isaac Boateng, is a concrete mixer and an employee of the same company.

He narrated that on September 27, 2022, the complainant came to work at 7:00 in the morning and closed at 3:00pm instead of 5:00pm. The following day whilst the complainant was taking his lunch, the accused person confronted him as to why he closed earlier than the usual closing time without permission.

This resulted in an exchange of words and the accused told the complainant he has been dismissed. The complainant reportedly became annoyed, packed his working attire and went to the accused person to pay him off.

A hot argument ensued between the two. Without provocation, the accused person came out of his office wielding a flip knife which he subsequently used to slash the complainant’s neck.

Counsel for the accused person Akpene Darko Cobbinah in an interview with ConnectNews said his client has so far shown great remorse as it was not his intention to harm his employee. He mentioned that, already, the company, through the instrumentation of his client, is paying for all medical expenses.

Speaking with ConnectNews, the complainant Isaac Boateng indicated the experience has left him terrified.

“All what I was demanding for was for my salary to be paid since he told me he had sacked me. Since the incident, my family members especially my wife and kids have always been crying. But I’m trusting that justice will be served”.

The case has been adjourned to October 11 for committal proceedings.