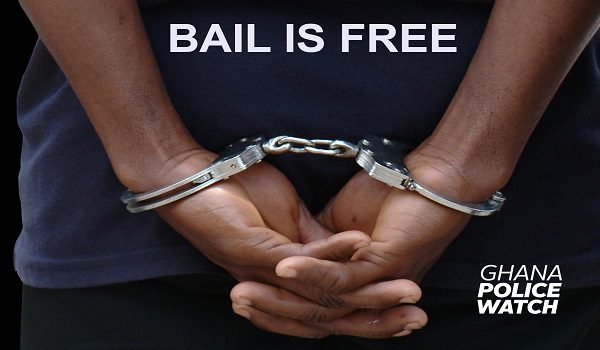 A Private Legal Practitioner, K.B Acheampong has advised some vagrants in the Effutu Municipality of the Central Region against paying any money to the police before getting bailed, should they be caught by the law.

According to Mr K.B Acheampong who is also the Municipal Coordinating Director, the Police usually take advantage of the vulnerability of suspects and their relatives to get bail by demanding money from them.

“The police know you have a case and are desperate to get justice and because a lot of people don’t know the law, they fall victim. The Bible say for lack of knowledge many people will perish and so the police will make you perish at the police station if you don’t know your rights and the laws,” he said.

He told the vagrants that the police use tricks to get these illegal monies during a bailing process.“We’re teaching these basic things; be firm and stand for your rights and stand against this normalised illegality.

”The Effutu Municipal Coordinating Director was educating vagrants on their basic human rights and responsibilities on the sideline of a project dubbed “Decriminalizing Vagrancy and Advocacy (DVLA) in Winneba.

The one-year project is being implemented by Crime Check Foundation And Open Society Initiative for West Africa (OSIWA).With the #StopCriminalisingPoverty, the two organisations are sensitizing vagrants on bye-laws of Metropolitan, Municipal and District Assemblies (MMDAs) while advocating for the enactment of a community service law for petty offenders.

The project was initiated as a result of the draconian laws by the MMDAs which get to affect the poor more.
Bail by law is free and must be devoid of all fees and charges but from the interviews, it is clear that a lot more public education must be put in place to ensure that the law is clearly understood and upheld in all situations and circumstances across the country.

It is the temporary release of a suspect from Police custody pending further investigations or court appearance.
During one of the sensitisation workshops on July 8, 2021, the Awutu Senya Police Commander, Superintendent Joshua Semenyo used the event to caution police officers who engage in extorting money from suspects before bailing them to desist from that.

According to Superintendent Semenyo, some police officers take advantage of suspects who desperately want to be bailed and charge them illegally to pay money before they’re released from police cells.

He was responding to concerns from vagrants in this regard.

“It is not written anywhere that you’re going to pay somebody to bail a suspect. But I have been telling people that you call for it. The person should be here at most 48 hours, then they put the person before a court, but you don’t want your brother to be there even for two hours.”

“In the process of putting pressure on the policeman by begging, he knows you have become vulnerable and some will ask for a bribe before releasing the suspect, which is uncalled for,” Superintendent Joshua Semenyo explained.

Meanwhile, the Effutu Municipal Coordinating Director lamented over the absence of a Legal Aid Department at the assembly stating there are many suspects who can’t afford to pay lawyers to defend them in court and are currently on remand for years.

“There are some cases, if you don’t have a lawyer, a court judge will never hear the case; it is the Attorney General’s responsibility to get such suspects lawyers.”

He disclosed that every lawyer in Ghana is mandated by law to support Legal Aid but lack of remuneration has discouraged many lawyers from doing so.  “Some lawyers register at the Legal Aid and offer their services but they never get paid that is the reason most of them have stopped,” Mr Acheampong added.

Concerns From VagrantsThe vagrants while raising concerns about some pressing issues in their communities called on the assemblies to build drains, public toilet facilities at market centres, waste bins, and clamp down on excessive noisemaking.

The Effutu Municipal Assembly after taking over 100 participants through the bye-laws advised them to engender effective collaboration for the development of the area.

The one-year project is being rolled out in 12 metropolitan assemblies in three regions: Greater Accra, Ashanti, and Central.
It has already sensitized 1200 vagrants about their rights and responsibilities to prevent any misunderstandings with the assemblies.

To monitor the progress and effectiveness of the Decriminalizing Vagrancy Laws and Advocacy project, a contact centre has been created after the sensitization to address the concerns of vagrants at the partnering organization, Crime Check Foundation.