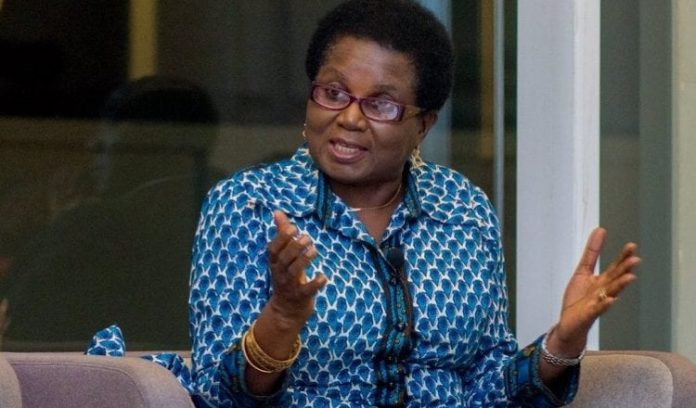 Journalist, politician, and former Minister of State in the John Kufuor administration Elizabeth Akua Ohene has been appointed the chairperson of the board of directors of the Social Security and National Insurance Trust (SSNIT). Ms. Ohene, during the first term administration of President Akufo-Addo, served as a speechwriter, contributing a great deal to most of the major speeches delivered by the President in the course of his Presidency.

Ms. Elizabeth Ohene, who also once served as the government spokesperson in President Kufuor’s Administration and described as courageous and brave by ace journalist Kwaku Addo Sakyi-Addo in a recent post, is expected to partner the management of SSNIT to pursue the vision of the Trust which is to be the model for the administration of Social Protection Schemes in Africa and beyond”, which would eventually lead to the provision of income security for workers in Ghana through excellent business practices”. How to improve the core function of SSNIT which are to register employers and workers, collect contributions, manage records on members, invest the funds of the Scheme, and process and pay benefits to eligible members and nominated dependants, would also certainly engage the efforts of the board chair and the management team of SSNIT.

SSNIT was established in 1972 under NRCD 127 to administer the National Social Security Scheme. Prior to 1972, the Scheme was administered jointly by the then Department of Pensions and the State Insurance Corporation. The Trust administered the Social Security Scheme as a Provident Fund Scheme until 1991 when it was converted to a Social Insurance Pension Scheme then governed by the PNDC law 247. The scheme in Ghana was reformed by an Act of Parliament, Act 766 of 2008, and was implemented in January 2010 to replace all pension schemes in Ghana including Cap 30. In 2014, the National Pensions (Amendment) Act 883 was passed to amend portions of Act 766. The Social Security and National Insurance Trust (SSNIT) is a statutory public Trust charged under the National Pensions Act, 2008 Act 766 with the administration of Ghana’s Basic National Social Security Scheme. Its mandate is to cater for the First Tier of the Three-Tier Pension Scheme. The Trust is currently the largest non-bank financial institution in Ghana. The primary responsibility of the Trust is to replace part of lost income of workers in Ghana due to Old Age, Invalidity or Death of a member where dependents receive lump sum payment. It is also responsible for the payment of Emigration benefit to a non-Ghanaian member who is leaving Ghana permanently. The Pension Scheme as administered by SSNIT has an active membership of over 1.6 million as at January, 2021 with over 226,000 pensioners who regularly receive their monthly pensions from SSNIT.

Miss Elizabeth Akua Ohene was born 24th January, 1945, and attended Mawuli School at Ho, between 1958 and 1964. She gained admission to the University of Ghana in 1964 and graduated with B. A. (Hon) English in 1967. The former Minister of State, also attended the University of Indiana, Bloomington, Ind. U.S.A. where she obtained Mass Communication Certificate. The US State Department-sponsored her to undertake a course involving travel around the USA and had also work experience from newspapers in three States in 1971. She was a Press Fellow from January to June, 1983 at Wolfswon College, University of Cambridge in the United Kingdom. Miss Elizabeth Ohene’s professional experience between 1967 and 1982 in Graphic Corporation saw her as a Reporter, Staff Writer, Columnist, Leader Writer and Acting Editor of the Daily Graphic and Mirror. She also had the opportunity to serve as a Member of the Board of Directors of the Corporation. In 1986, she solely founded the Talking Drum Publications and until 1986, she was the Publisher/Editor of the publications, a weekly news magazine on West African Affairs. She also worked for BBC World Service, London, UK. Madam Ohene had worked with the BBC as a Producer of Radio Programmes, then successively became a Presenter, Senior Producer on World Service and British Domestic Radio, Researcher and Columnist on the Focus on African Magazine and Deputy Editor in the African Service for English Daily Programmes, and in charge of the operational budget. Miss Elizabeth Ohene also edited the award-winning of Focus on Africa Programme. She also regularly reported for the BBC from various parts of Africa and was the resident correspondent in South Africa from 1993 to 1994 during the transition from apartheid to the first democratic elections. The former Minister has conducted a lot of training programmes for journalists for the BBC in South Africa, Nigeria, Liberia, Senegal, Sierra Leone, Kenya, Ethiopia, and Somalia. She also ran a network of more than 150 stringers located in all parts of Africa for the BBC Africa Service and also supervised their editorial work and kept their equipment and training needs updated. Miss Ohene’s professional activities include being a member of the International Women Media Foundation which actively promotes women’s competency and leadership in the media. The foundation has established an Africa Women’s Media Centre in Dakar, Senegal, where courses are run for African women in the Media according to their needs. To date, the Minister has been a Board member of the International Commission of Investigative Journalists which coordinates major investigations of stories around the world. Since 1997, she has served as a Member of the CNN Africa Journalist of the Year Competition. Source: 3news.com|Ghana