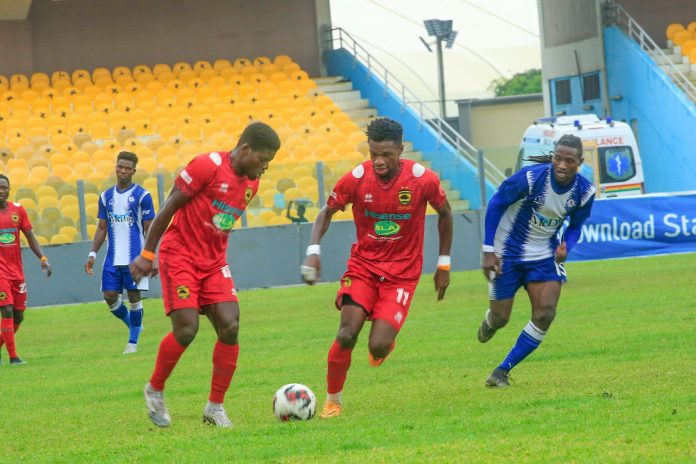 Asante Kotoko defeated Great Olympics 1-0 at the Accra Sports Stadium thanks to Franck Mbella Etouga’s 21st goal of the season.

The goal puts the Cameroonian one goal ahead of close rival Yaw Annor in the race for the golden boot.

Annor’s goal tally remained at 20 after failing to score as AshantiGold in Dawu against Dreams FC.

King Faisal’s chances of survival improved after a crucial home victory over Hearts of Oak in Kumasi.

WAFA came from behind to defeat Bibiani Gold Stars 4-3 away from home. The Academy Boys, who are in the relegation zone, trailed 2-0 at halftime but scored four goals in the second half to take three points and keep their slim hopes alive.

Relegation-threatened Eleven Wonders dropped points at home, drawing 0-0 with Legon Cities, while Real Tamale United are in danger of suffering relegation after a 5-1 thrashing at Karela United.

Medeama made light work of Elmina Sharks and Aduana Stars’ poor run continued with a 1-0 defeat against Bechem United.