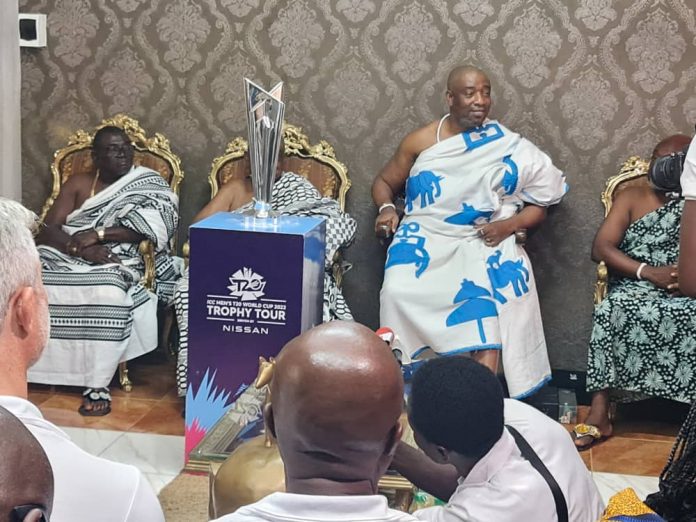 Ga Mantse, King Tackie Teiko Tsuru II, has pledged to support the construction of a world class cricket stadium in Ghana to help develop the sport just like soccer and boxing.

King Teiko Tsuru II made the declaration when he received a delegation from the International Cricket Council (ICC) T20 World Cup Trophy at the Ga Traditional Council in Accra Friday, September 23, 2022.

The Cricket Association had already made a request from the traditional council to provide them a land to construct a facility to help promote the sport among the youth in Ghana.

President of the Ghana Cricket Association, Emmanuel Asare, said their mission was to present the trophy to the Ga Mantse and seek his permission as the landlord of Greater Accra before outdooring the trophy to the rest of the country.

The ICC Area Development Manager for Africa, Patricia Kambarami, indicated her joy with presenting the trophy to the Ga Mantse and expressed the hope that Ghana would soon join other African countries in the world cricket tournament.

The trophy would be in the country for two days and expected to depart Saturday, September 24, 2022.

The trophy has already visited over 30 locations in 12 countries across four continents.

The Men’s T20 World Cup trophy made stops in Fiji, Finland, Germany, Indonesia, Japan, Namibia, Nepal, Singapore, and Vanuatu for the first time, taking the sport to more fans in different countries to get a glimpse of T20 cricket’s ultimate prize.