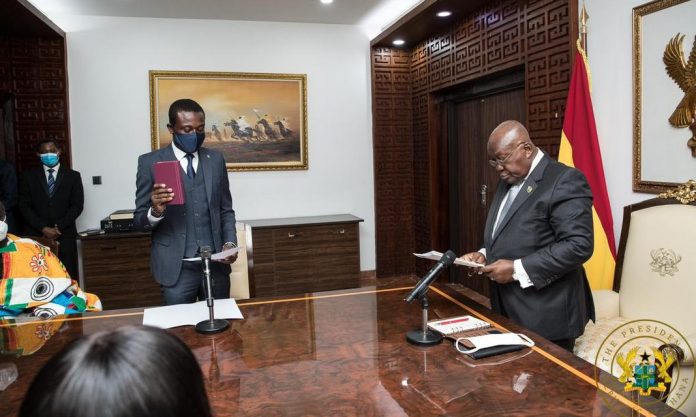 Newly sworn-in Special Prosecutor Kissi Agyebeng has vowed to substantially reduce corruption, which he says is one of two pandemics confronting the country currently.

“And as I come into this office, I pledge to the people of Ghana as i said exactly two weeks ago that I am going to work assiduously with deliberation to suppress and repress corruption.”

Mr Agyebeng, 43, was speaking at his swearing-in at the Jubilee House on Thursday, August 5.

He insisted that he cannot stop corruption but “my office is going to drive it down and repress it to its barest minimum”.

Kissi Agyebeng takes over from Martin Amidu, who resigned from the position as a result of what he described in November as interference on the part of the president, Nana Addo Dankwa Akufo-Addo.

President Akufo-Addo, in his speech, said he does not regret appointing Mr Amidu as the first Special Prosecutor.

He said he did his best to resource the Office of Special Prosecutor (OSP) in carrying out its mandate.

The president expressed confidence that the overwhelming support received by Mr Agyebeng will go a long way to help him discharge his mandate with excellence.