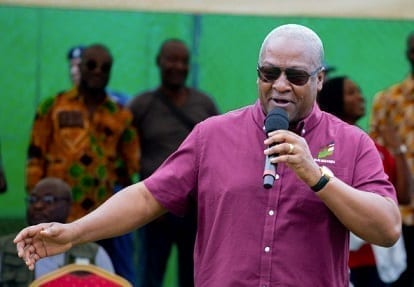 In his first outing after the dismissal of his election petition by the Supreme Court, Mr Mahama charged supporters in the Ketu South municipality of the Volta Region on Wednesday, August 4 not to be disappointed with the outcome of the December 7, 2020 elections.

“So, I want to thank you very much and to say that this is virtually my first public outing after the election of the 2020,” he told a gathering at Salakope, where he donated some relief items to victms of the latest tidal waves there.

“So, I want to take the opportunity through you, the people here to thank all our brothers and sisters in the Volta Region for the strong support that you showed me during the elections.

“You didn’t disappoint me at all. You did your part.”

The three-time presidential candidate of the NDC charged the supporters to ensure that the party bounces back strongly to win the next elections.

“Let us not be disappointed, let us not be discouraged. They say he who fights and runs away or he who fights and loses, lives to fight another day and so what we need to do is to put us on reorganising the party, selecting a new leadership and getting a flagbearer to lead us back into the next battle and I am sure that in 2024 , by the grace of God, by the grace of Mawu Lisa, NDC will come back into office.”