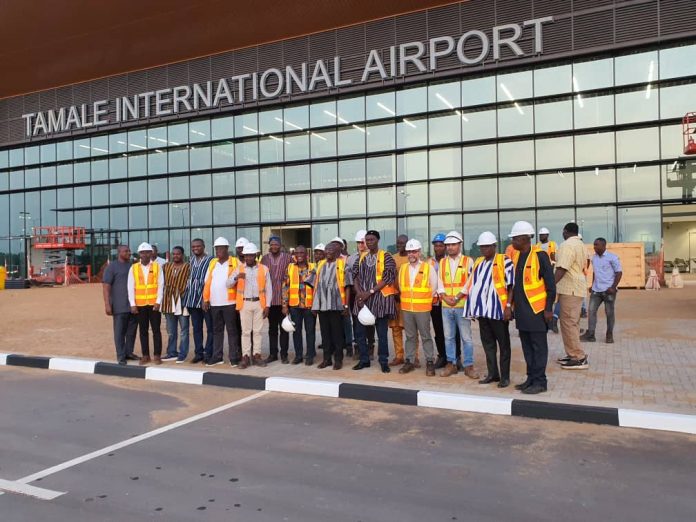 A pro-New Patriotic Party group has described as “lame” and “impotent” arguments by the opposition National Democratic Congress that the Tamale Airport Expansion Project was started before the current administration.

The group said the opposition party only wants to take credit where it is not due because the project was facilitated under the current government.

This was contained in a write-up on Wednesday, June 15.

It came after Vice President Dr Mahamudu Bawumia on Monday, June 13 inspected facilities at the Tamale International Airport, which is 95 percent complete.

Find the write-up below:

The latest loose and feeble argument by some NDC element to take credit for the Phase 2 of the expansion of the Tamale Airport won’t go unchecked. The monotonous feature of the an NDC social media member is to take credit for all projects executed by all regimes and even projects which were constructed before the formation of NDC. We will one day wake up to the news that NDC created Adam and Eve.
Back to the the main argument of this write-up.

It is trite that the Upgrading, Expansion and Constuction of Tamale Airport has passed through almost 4 regimes and each government has played critical roles in the realisation of that dream.

The bone of contention herein is ” Which Government facilitated the current phase (Phase 2) of development and expansion of the Tamale Airport? There are no ifs, and, or buts about this question when answering. It is as easy as reciting ABCD or 1234 as a kindergartener.
It is the current NPP who facilitated this.

On Thursday, 3rd November, 2016 a motion for the approval of a Commercial Contract Agreement between Government of Ghana (GoG) and Queiroz Galvao Construction UK Limited was moved and approved for the construction of the Tamale International Airport Phase II after the Committee of Road and Transport had submitted their report on the contract.

HOWEVER, the financing of the project was intended to be done by Banco Santander but they failed to put together a loan syndication so on Tuesday, 24th July 2018, a motion was carried in Parliament for the approval of a new Commercial Agreement between GoG and KfW IPEX-Bank of Germany as the original lender with Export Credit Guarantee from the United Kingdom Export Finance.

Under the NPP Government’s agreement with KfW IPEX-Bank of Germany, a new project scope was conceived with an expanded specification compared to what was conceived under the NDC but the same cost (USD 70,000,000.00) was maintained.

Can the NDC MPs and their appendages tell us if the loan facility is added to NDC’s debt portfolio or that of the current NPP? This is where the rubber meets the road if they answer this.

Attached are Hansard of 2016 of their fruitless agreement and Hansard of 2018 of the fruitful agreement which has brought about this state-of-the-art Tamale edifice and also the Cabinet Memo of 2018 which was sent to Parliament by Ministers of Finance and Aviation for Parliament’s perusal before the approval of the loan facility.

I will therefore urge inquiring minds to read all the relevant information and make a succinct conclusion.

The NDC cannot escape Tamale Airports’ facts and reality, as much as they want to.