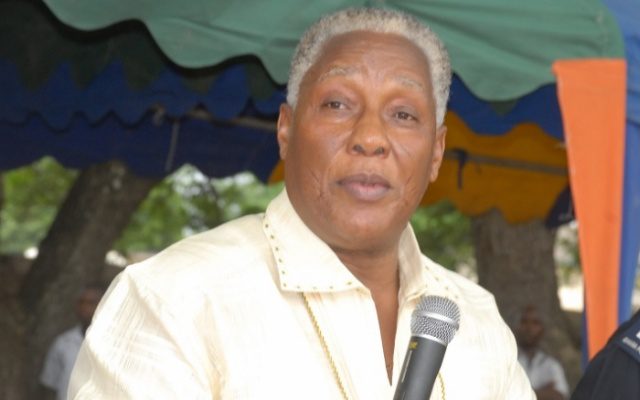 A former Minister of Works and Housing, Mr Enoch Teye Mensah, has said that the comments made about him by National Communications Officer of the National Democratic Congress (NDC) Sammy Gyamfi in the suit against Collins Dauda over the Saglemi Housing project, were all lies.

He said the facts do not support what Sammy Gyamfi said about him.

This comes after the Attorney-General (A-G) and Minister of Justice, Godfred Dame earlier this week filed court processes to prosecute former Minister of Water Resources, Works and Housing, Alhaji Collins Dauda; his successor, Dr. Kwaku Agyeman-Mensah, and three other persons for allegedly wilfully causing financial loss to the state over the Saglemi Affordable Housing Project.

The state is hitting the accused persons with 52 counts of criminal charges against them for allegedly misapplying the state’s $200 million to pay for less than 1,500 affordable housing units at Saglemi, instead of the 5,000 units parliament granted approval for.

In response to the suit, Sammy Gyamfi said in a statement among other things that “It is instructive to note, that the Minister of Works and Housing at the time, Hon. E.T Mensah informed Parliament during the debate on the approval of the loan facility, that the 5000 housing units will not be built at a go, but rather over a period of time, that is, in phases. This is captured in black and white in the Parliamentary Hansard of 23rd October, 2013.

But Mr ET Mensah who is currently a member of the Council of State said on the Good Evening Ghana show on Tuesday August 3 that “Every thing is not true, it is a packed of lies. You [host of the programme] should have alerted me, I would have come with the handover notes.

“The project started when the STX became a fiasco. It was Mills’ project, he was the one who signed and gave the approval.”

Below is Sammy Gyamfi’s full statement on the suit…

ALL YOU NEED TO KNOW ABOUT THE “SAGLEMI” HOUSING PROJECT.

1. In the year 2012, the NDC government in line with its vision of addressing the huge housing deficit facing the country secured a loan of $US200 million from Credit Suisse International for the construction of up to 5,000 affordable housing units.

2. The terms of the loan agreement was approved by Parliament on 23rd October 2013, in line with Article 181(1) of the 1992 Constitution of Ghana. Note that, Parliament only approved the Loan Agreement and not the Works Agreement for the project.

3. It is instructive to note, that the Minister of Works and Housing at the time, Hon. E.T Mensah informed Parliament during the debate on the approval of the loan facility, that the 5000 housing units will not be built at a go, but rather over a period of time, that is, in phases. This is captured in black and white in the Parliamentary Hansard of 23rd October, 2013.

5. Under the Works Agreement, Government was supposed to provide a serviced plot of land with roads, water, electricity, drains, sewage systems and other ancillary facilities for the smooth takeoff of the project, the cost of which had not been factored into the amount of $US200 million approved by Parliament for the project. Since government did have any funds to fall on to discharge these responsibilities, the decision was taken by the ministry to use part of the approved amount of the project ($US200 million) for all the necessary ancillary works to pave way for the construction of the housing units and to make the project site a commercially viable and habitable community. This is what informed the decision by the Ministry to do the project in Phases, as the Minister, Hon. E.T Mensah had already intimated to Parliament. Clearly, the 5,000 houses could not be built at a go.

6. Also, the initial drawings presented to the Ministry of Works and Housing by the developer was based on the Brazilian building code and not fit for the Ghana setting. In fact, it was on this basis that the local district assembly refused an application for building permit for the project. The project Consultant (AESL) and the Contractor was then tasked under the Works Agreement to generate the appropriate designs and drawings for the project.

7. Under the Works Agreement, the first Phase of the project was to deliver about 1,500 housing units which was going to be bought by the Off-taker, Ghana Home Loans and proceeds from same was supposed to be paid into a revolving Escrow Account to be used for the next Phases, until all the 5,000 housing units were delivered. The claim that the decision to build 5000 housing units was reviewed downwards to about 1500 houses is therefore palpable falsehood.

8. At no point was the objective of building 5,000 houses approved by Parliament changed or varied, save that, same was supposed to be delivered in Phases. And this was going to be delivered with the approved amount of $US200 million only and nothing more.

9. When Hon. Collins Dauda took over as Minister for Works and Housing, he only amended and restated the Works Agreement in line with the provisions of same, and reduced the number of Phases from 4 to 3 to shorten the project duration.

10. It is instructive to note, that the approved funds for the project was at all times in the custody and control of the Ministry of Finance, which was responsible for effecting payments for actual work done by the contractor. Payments were made upon the project consultant raising Interim Payment Certificates (IPCs) for actual work done and same being recommended for payment by the Chief Director of the Ministry of Works and Housing. All payments made under the erstwhile NDC government went through this due process and was commensurate with actual work done on the ground. Hon. Collins Dauda was not responsible for either raising IPCs or effecting payment for work done.

11. The project consultant (AESL) who raised all the IPCs hasn’t been accused or charged by the Akufo-Addo government for any wrongdoing.

12. Save a half-baked draft report by the Ghana Association of Surveyors which was done in an unprofessional manner and without recourse to AESL, the project consultant, there is no proper Audit that has established over payment or any case of embezzlement or wrongdoing in the implementation of the project. There hasn’t been any misapplication of funds or financial loss to the State.

13. It is worthy of note, that the Akufo-Addo government under the leadership of Hon. Samuel Atta Akyea as Minister for Works and Housing, amended and restated the Works Agreement and effected payments of over $US5.6 million to the contractor for the project. Yet, neither Atta Akyea nor his Chief Director has been charged for any wrongdoing by this government.

14. For emphasis, the claim that Parliament approved an agreement for 5,000 housing units but that was reviewed to about 1500 houses without recourse to Parliament is false. Firstly, at no point did government indicate that it was going to stop the project at building 1500 houses only, which is just Phase 1 of the project. The decision that the 5000 housing units should be built in Phases was provided for in the Works Agreement which was executed by Hon. ET Mensah. What Parliament had to approve was the terms of the loan Agreement as required under Article 181 (1) of the Constitution which they did, and not the Works Agreement. In any case, the Works Agreement was amended and restated by the Akufo-Addo government without Parliamentary approval. And so assuming the lack of Parliamentary approval for the Works Agreement or a variation of same constitutes a crime, then why hasn’t Atta Akyea or his Chief Director been charged? Why this obscene selective application of the law?

15. What is germane in all this, is the failure and/or refusal of the Akufo-Addo government to complete the about 90% complete Saglemi housing project (Phase 1) for the benefit of Ghanaians. The case against Hon. Collins Dauda and others is frivolous and a poor attempt by the vindictive Akufo-Addo/Bawumia government to create a convenient excuse for their abandonment of the Saglemi Housing project. If there has been any financial loss to the State at all, then it has been occasioned by the people who have recklessly abandoned and supervised the deterioration a 90% complete project for almost five (5) years. The Akufo-Addo/Bawumia Government should stop persecuting innocent people and rather take urgent steps to complete the project which they have left to rot. The Ghanaian taxpayer deserves better.