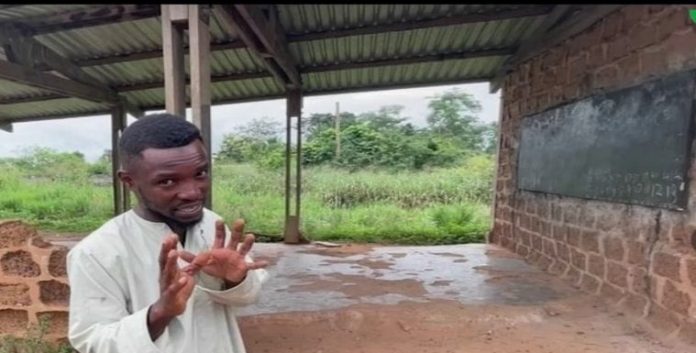 Michael Owusu Afriyie, popularly known as, Teacher Kwadwo, who was summoned before the Disciplinary Committee of the Akrofuom District Educational Directorate for what they termed as his “professional misconduct” has described his experience at the meeting as a total ‘joke’.

According to him, the Director and the Human Resource personnel were not there at the meeting when he went there. He said he only met unknown faces at the meeting, headed by a man who said he was the Chairman.

Narrating what ensued at the meeting to 3news.com, Teacher Kwadwo said the Chairman asked him what he had to say, to which he replied that he was not there to say anything because there was nothing in the summons for him to answer.

He said he told them he was there to listen to the so-called “professional misconduct” levelled against him by the Disciplinary Committee.

Teacher Kwadwo said the Chairman asked him if he wanted them to resolve the issue like “father and son” or go along the legal tangent?

According to him, the Chairman kept hammering on the “father and son” angle to induce him to take that angle to resolve whatever they had against him but that he declined by saying he wanted the legal way instead.

Teacher Kwadwo said his declaration to opt for the legal tangent infuriated the man to the point of saying they have cited him for “absenteeism” and another charge he does not remember. He said they brought a booklet which supposedly contained his “professional misconduct”, which they gave him one.

According to him, the Chairman insisted that he put his phone off, ostensibly for the fear of being recorded. “So the man first put his phone off and said leadership by example”, to insist on him to do same.

“It was funny, so when I said I don’t want the ‘father and son’ resolution then he said they will serve me another letter to appear before the committee, so I told them I’m ever ready. I asked them if they are done and they said yes you can leave. As usual, they tried to intimidate me to opt for the ‘father and son’ resolution. The whole meeting didn’t last for even 8 minutes”, he said.