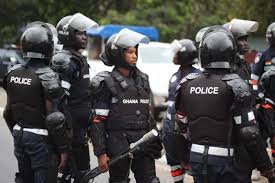 The Ashanti Regional Police Command have arrested five armed robbers who attacked a gold dealer at Akyem Adukrom in the Eastern region.

A statement by the Police said “The Ashanti Regional Police Command conducted an intelligence-led operation on the Accra-Kumasi Highway leading to the arrest of five armed robbery suspects who had robbed their victim, a gold dealer of some gold at gunpoint at Akyem Adukrom.”

The statement further says three others who were included in the robbery are currently on the run and are being pursued by the police.

One armed robber arrested, others being pursued for killing a police officer