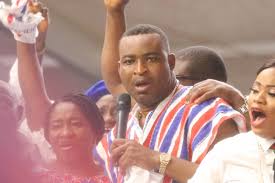 The Ashanti Regional Chairman of the New Patriotic Party (NPP) Bernard Antwi Boasiako (Chairman Wontumi) who has been re-elected has said the governing party will definitely break the 8-year cycle in the 2024 general elections.

In his victory speech on Saturday May 28 after the NPP’s Ashanti region election at the Baba Yara Stadium in Kumasi, he said “our campaign of breaking the 8 has started from Baba Yara Stadium, NDC cannot stop us.
“[NDC] can lie, [NDC] can spread fake news but winning the 2024 elections is a movement.”

Here is what Chairman Wontumi had to say after he was re-elected as Chairman of the Ashanti Regional NPP. #3NewsGH pic.twitter.com/2eFzJOuAu4

He polled 464 votes against his closest contender’s 306.
Meanwhile, in the Eastern Region Secretary of the NPP Jeffery Konadu Addo has been rewarded for his hard work as he has been elected regional Chairman of the party.