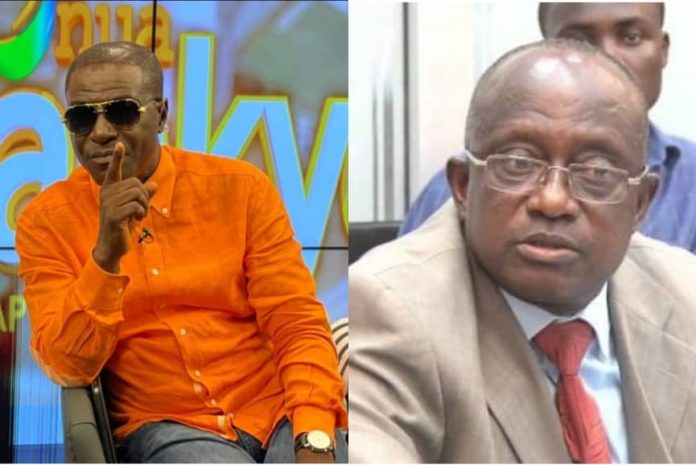 He says the Minister, together with the Lands and Natural Resources minister, Samuel Abdulai Jinapor, have disrespected the intelligence of the Asantehene, His Royal Majesty Otumfuo Osei Tutu II.

According to Captain Smart, the duo telling the king what to say and what not to say was an affront to the customs and traditions of the land, the reason the regional minister, who should have known better as an Asante, should be banished from the land.

In May 2021, the two ministers together with other personalities presented a speech to the Asantehene to be read at an event, but rather asked him not to make any other comments but to stick to what he has been given.

But before his speech, the king revealed the duo had asked him to stick to the speech. Meanwhile, Otumfuo had told them about 30% of the gathering in the room at the time being aware of those doing galamsey.

Telling the Asantehene what to say and what not to say, is an indictment on the integrity of Otumfuo, Captain Smart has maintained.

His comment comes on the back of the action taken by the KTC on Akwasi Addai Odike, founder and leader of the United Progressive Party (UPP) for his unsavory comments against the chiefs.

Odike had said he would stage a demonstration against the chiefs in the region for allowing galamsey activities to perpetuate. The chiefs, who found the comment uncultured, invited Mr. Odike to Manhyia, which he refused. They slaughtered a sheep on his head and banished him from the land.

But speaking on his show, Maakye, Monday, August 29, 2022, on Onua TV, Captain Smart noted Otumfuo gave his Council a signal to put Mr. Osei Mensah to order but did not get the drift.

“Kumasi Traditional Council, ban Ashanti Regional minister too. His deed for telling Otumfuo to stick to what he has been given and not pass any comment is against the customs of Asante kingdom.

“Who tells Otumfuo what to say? Why should the two tell him what to do? Otumfuo’s statement at the even was a proverb to the KTC to call the ministers to order but you didn’t get the import of his message,” he noted.

Captain Smart indicated Osei Mensah and Jinapor were aware party leaders are involved in galamsey operations in the region, the reason they asked Otumfuo to stick to the speech.

He asked the regional minister to “go and apologise to Otumfuo and the Kumasi Traditional Council.”