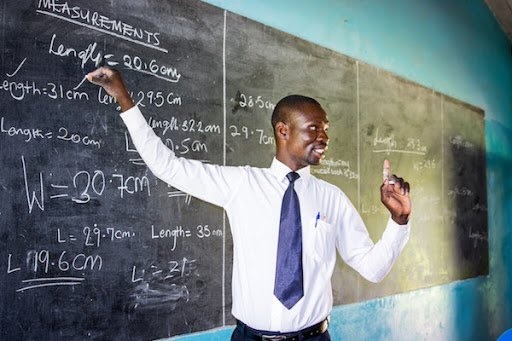 A trained teacher, Kenneth Divine Boakye, is suggesting to the International Monetary Fund (IMF) to carry out some psychological examination before considering a bailout for Ghana.

He is therefore pleading with them to come with some psychiatric nurses and doctors to examine the minds of Ghanaian leaders as part of their conditionalities before granting any support to the nation.

Mr. Boakye, who has taught for 35 years since 1985 is set to receive an accumulated GH₵11,792.54 as his Past Credit –the amount he will receive when he goes on pension.

Due to this, he has vowed not to let any of his children venture into the teaching profession. He says he will disown any of his wards that gets closer to anything teaching.

He was discussing the 20% COLA and the teachers strike with other colleagues on Onua TV/FM’s Maakye on Thursday, July 7, 2022.

To them, the COLA is a regressive call which should not warrant the energy their union leaders are exerting, but rather, they should focus on increasing their salaries instead.

“We entered [Teacher Training College] in 1983 and completed in 1987 and our greatest misery as teachers is our salaries and what kills us most is our unions. I’ve taught for 35 years which is 409 months. My 3 best years average salary is GH₵38,216.19.

“My Past credit is 11,792.54 which is the money I’m going to get when I go on pension. I’m sad to have helped Ghana. I’ve taught as a trained teacher from 1987. I’ve thought for 35 years,” he read from a statement sent to him by the Social Security and National Insurance Trust (SSNIT).

Comparing what he would get after his many years of service to the nation with politicians fours years ex-gratia, Mr. Boakye said there is something wrong with Ghanaian leadership.

“When the IMF is coming, they should add psychiatric nurses and doctors to examine the minds of our leaders before granting us the bailout.

“If my child steps foot on someone’s teaching certificate, he/she ceases to be my child,” he told Captain Smart, host of the show.

He added those championing for the regressive 20% COLA which would not have any bearing on their pension and can be scrapped anytime should rather fight for an increment in salaries.

Rather than enrolling any of his kids to engage in any public service that would treat him miserably, Mr. Boakye says he would rather operate a chop bar business with them.