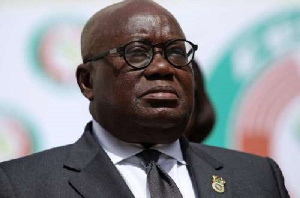 A group within the ruling New Patriotic Party (NPP), Loyal Patriots have asked President Addo Dankwa Akufo-Addo to crack the whip on some of his appointees in his quest to restore the economic fortunes of the state.

In a statement released Monday, July 4, 2022, the group says in as much as Ghana has gone for bailout from the IMF, the causes, mostly by external factors beyond the control of government, others are indigenous and must be tackled internally.

Since the coming into office of the Akufo-Addo led administration, the group says no reshuffle has been done making some of his appointees seeing themselves as untouchables.

This, the group added has created uneasiness amongst loyalists of the party with regards to comments they hear on air and in town.

If indeed, the NPP have the men as they claim which they believe, the president should reshuffle his nonperforming ministers and appointees to restore the image of the party.

Read their full release below:

4th July, 2022.
RESHUFFLE NEEDED URGENTLY
It is a known and accepted fact that the current general economic situation in the world is hurting and Ghana is also experiencing its worst of the economy. This is the truth. However, it should be accepted as a matter of truth that it is not the creation of the Akufo Addo led NPP government. There are both internal and external factors responsible for the economic difficulties we find ourselves in as a nation which has necessitated the country seeking to subscribe to the International Monetary Fund (IMF) for a bailout.

COVID-19 as a major economic erosion affected every country especially, emerging economies like Ghana and just as we were all breathing cool for a respite, then, came in the Russia – Ukraine war. As an icing on the cake, this needless war is putting a lot of strains on the world economy and unfortunately, nations such as Ghana which are not strong enough economically are faced with serious economic difficulties.

These major external factors are causing a lot of economic destabilization. In as much as the government of the day is working around the clock to find solutions using both home grown policies and with other international agencies such as the IMF to mitigate the effects of the economic impact, there are other internal factors which are self inflicted and are causing a lot more injuries to the national economy.

These factors include but not limited to non linkages of government programmes, unstable currency, domination of our productive sectors by foreigners, our people’s penchant desire for foreign made goods which are not being regulated or tackled by the government and most importantly, non performance of some government appointees.

It is a common observation that some appointees of the government are sleeping on the job and it has become the concern of most political watchers and even the ordinary man on the street. Most of these appointees by their actions and inactions believe that they are untouchable. Their reasons, one cannot easily put a finger at but obviously points to the fact of close association with people who wield a lot more powers in the corridors of power in the government. What should be done and must be done by the President is to cause reshuffle in his government and go a step further ahead to relieve some appointees of their portfolios but he hasn’t done that. The President has not caused any major reshuffle since NPP assumed the reigns of government in Ghana from January, 2017 in his first term through to date, his second year of the last four year mandate of his second term.

Everyday on the streets, radio and on television there is an outcry about the President inability to crack the whip on the conduct of some of his appointees. The public utterances of some of them are so bad and hurting and some of us find it strange why the President is still defiantly maintaining and keeping some of his appointees in his government. He needs to reshuffle his Ministers and other appointees who are sleeping on the job or get some of them out completely.

If as a party, we claim that we have the men, which we the Patriots believe we do, what is then preventing the President from changing some of them and bringing other fresh blood in? He must as a matter of urgency do a reshuffle and sack some of them to prove that his government means business. If he’s able to do that, it will also reinforce the fact that the reserve bench is truly occupied with qualified players ready to step on the field to perform.

This will give Ghanaians hope that the NPP government can bite and it is prepared to make Ghana better.
The cry of the LOYAL PATRIOTS and all most Ghanaians.