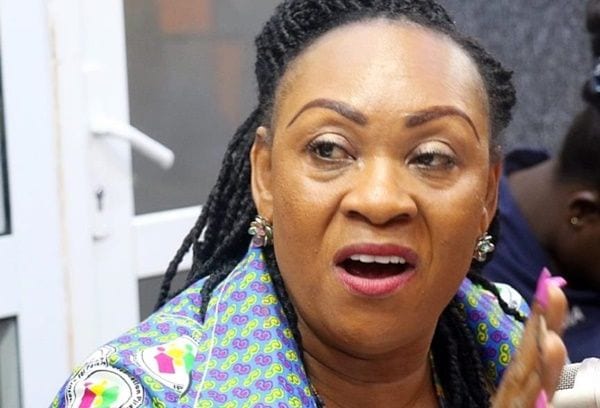 Fishermen in Elmina in the Central Region and all the others in the coastal areas of Ghana have apologized to the Minister of Fisheries and Aquaculture Mavis Hawa Koomson for rejecting the food items her ministry sent to them.

The fishermen rejected the food items because the Minister had announced that she was not going to condone light fishing on the sea again when the Closed Season opens.

Nana Kwesi Duncan I, Chief Fisherman of Elmina told Dzifa Bampoh in interview on the First Take on 3FM Monday August 2 that the fishermen had a wrong information about the rationale behind the food items hence their action.

He apologized on behalf of the fishermen.

“Some fishermen and some fish mongers were deceived, they had a lot of wrong information about that meeting.

“The information they had was that the minister was going to give them some kind of food items and that the Minister had taken certain positions. But personally, I believe what they heard was a wrong information.

“The Minister had a different communication and message for the fishermen but because they reacted or responded negatively she couldn’t even present whatever she wanted to say.

“We really apologize for that. Going forward I am sure there are a lot of ways we can manage these issues.

“I am using this opportunity to apologise on behalf of, not only Elmina, but all along the coast of Ghana, all the fishermen,” he said.

He stressed “I wanted to say that whatever that happened in Elmina. I on behalf of the fishermen and all the people of Elmina, we really apologize.

“But I am sure that whatever that happened we have elders in Elmina who have approached the Minister and I am sure after deliberations everything will be resolved.”