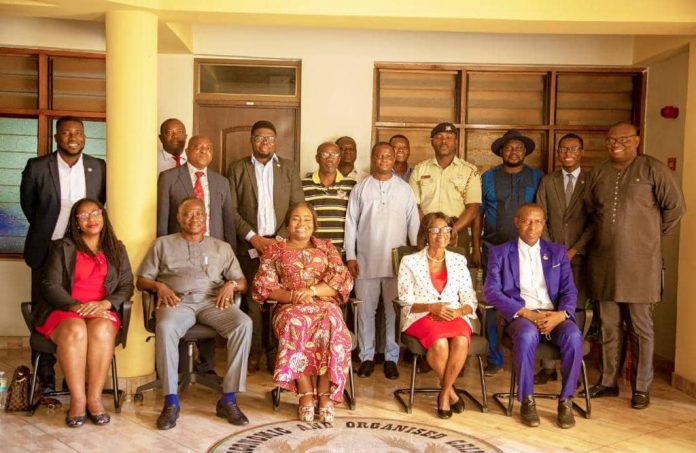 The Association of Certified Fraud Examiners (ACFE) –Ghana has encouraged the Executive Director of the Economic and Organised Crime Office (EOCO) COP Maame Yaa Tiwaa Addo-Danquah to remain dedicated, diligent and trustworthy in order to lead the fight against the incidence of fraud and financial crime in the country.

The group has pledged to team up with EOCO and other fraud fighting agencies to strengthen the governance and control systems in the fight against fraud.

This came to light when a delegation made up of Chartered Accountants, Auditors, Lawyers, Investigators, Law Enforcement Officers and Security professionals from ACFE paid a courtesy call on the EOCO Boss.

President of ACFE Ghana Chapter, Dr. Rebecca Atswei Lomo, in her briefing stated that the visit was to assure EOCO of their available skills to assist the Office, should they need fraud examiners and investigators to assist in handling fraud related issues.

She underscored the need for the association to team up with all fraud fighting agencies, especially EOCO, to encourage both public and private institutions to strengthen their governance and control systems in the fight against fraud.

“We look forward to collaborating with your Organization and other fraud and financial crime fighting agencies during our International Fraud awareness week celebration in November 2022,” she indicated.

The celebration, according to her, seeks to educate the public on fraud prevention and detection and how to report fraudulent and corrupt activities based on the provisions in the Whistleblower Act 2006 (Act 720).

She said ACFE Ghana would also hold a fraud Conference in 2023 and would be glad to have EOCO team up with ACFE to educate the public to appreciate what constitutes fraud and corruption, its impact on society and how the menace could be tackled to minimize it.

This, she said, would assist the public to understand that fraud and corruption prevention was the responsibility of everyone in society.

COP Addo-Danquah, in her remarks, embraced the idea of working together in combating the incidence of fraud, white colour and financial crime.

She emphasised the need to build the capacities of investigators in line with contemporary law enforcement practices.

The EOCO boss revealed that currently the Office is engaging qualified chartered accountants to organize tailor-made training programmes for their accountants; put all these resources together and with the support of Institute of Chartered Accountants train them to become forensic accountants.

COP Addo-Danquah also noted that EOCO would as well encourage them to become members of Certified Fraud Examiners, and anticipated that building their own capacity will enhance their skills.

She mentioned that this would go a long way not only for EOCO but to also support other law enforcement agencies including Office of the Special Prosecutor, Criminal Investigation Department, and Narcotic Control Commission, who might need the services of forensic accountants.

ACFE is the world’s largest anti-fraud organization and supports more than 90,000 members in 180 countries.
Its mission is to reduce the incidence of fraud and white-color crime and to assist the membership in fraud prevention, detection and deterrence.