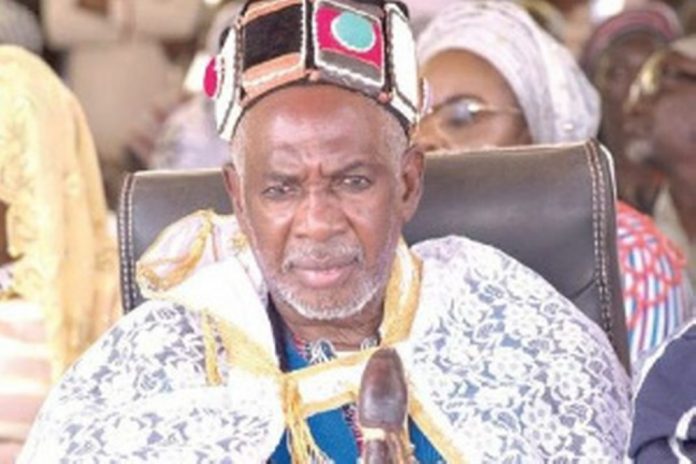 After denying knowledge of flogging two persons, barely 24 hours ago, Naa Fuseini Seidu Pelpuo IV, the Overlord of the Waala Traditional Council has stated it was under his orders.

The two were allegedly involved in a sex video scandal that went viral.

He said it formed part of measures the Council including opinion leaders in the municipality instituted to fight the immoral and deviant behaviour among the youth in the area in recent times.

He was speaking with the Ghana News Agency (GNA) to personally react to the said video in circulation on social media and for him to give reasons for denying that the youth took arbitrary action in flogging the boy and the girl without his concern.

He explained that flogging was part of the regulations put in place to instill discipline in the youth, who in recent times put up some behaviour detrimental to the well-being of society.

“Besides the flogging, parents of the boy and the girl will also agree to let the two get married and stay as a couple to serve as a deterrent to the youth and to live upright lives,” he said.

The Wa Naa said the regulations were aimed at allowing decency, morality, and peace to prevail in the Municipality to attract investors for the teeming youth to get employed.

“The measure will also let people who come to Wa to enjoy their stay and outsiders who have their relatives will not be worried about their safety,” he added.

He said he and his elders as well as other opinion leaders would not shun their responsibilities but would ensure that Wa remained a peaceful town for all to stay.

On Tuesday, May 31, Naa Kadri Ibrahim, the spokesperson for the Wa Naa condemned the Hogging on behalf of the chief.

He said the act could only drag the reputation of the palace into disrepute and gave the assurance that the perpetrators of the barbaric act would be fished out to face the full rigours of the law.

The admission of Wa Naa that he gave his blessing to the Hogging contradicts his spokesperson.