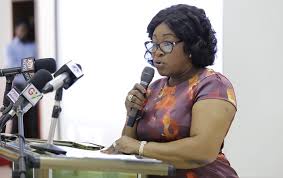 The Ministry of Foreign Affairs and Regional Integration has intervened to resolve the issue between the Inspector General of Police, Dr George Akuffo Dampare and the British High Commissioner to Ghana, Harriet Thompson.

“We have therefore invited contact of both the British High Commissioner and Inspector General of Police to resolve the issue at stake,” a statement issued by the Ministry on Wednesday June 1 said.

The Police Administration issued a strongly-worded response to what they described as uninformed, biased comment made by the British High Commissioner to Ghana on the arrest of Convener of FixTheCounctry Movement, Oliver Barker-Vormawor, on 17th May, 2022.

In a tweet on Tuesday May 17, Harriet Thompson said regarding the arrest that, “Oliver Barker Vormawor, convener of #FixTheCountry movement, arrested again, I understand for a motoring offence on his way to court. I’ll be interested to see where this goes…”.

But in a statement issued by the Inspector General of Police, Dr George Akuffo Dampare on Tuesday May 31, the Police said “we consider you tweet violation of the Vienna Convention on Diplomatic Relations 1961 which enjoins diplomatic missions not to interfere in the internal affairs of their host countries.

“Your Excellency, the fact that you use the ‘arrested again’ we believe must mean you were making reference to previous occasions Mr Barker Vormwaor was arrested for threatening the security of the state and recently for motor traffic offences.”

Barker-Vormawor was arrested and charged for “careless and inconsiderate driving” at a Madina District Court.

He was arrested Tuesday May 17 by officers of the Motor Transport and Traffic Department (MTTD) of the Ghana Police Service.

He announced the charge himself on his personal Facebook page.

This matter has divided public opinion with some analysts indicating that the IGP was right in issuing the letter whereas others think otherwise.

Dampare to speak on policing at KNUST lecture today