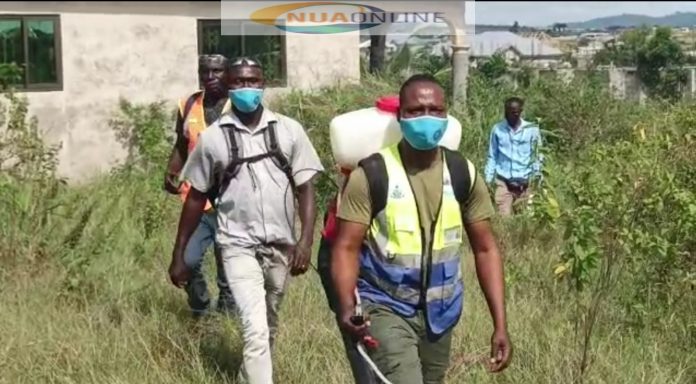 A 40-year-old man, Kwesi Alhaji, has been found dead at Kasoa Opeikuma High-Tension in the Awutu Senya East Municipality of the Central Region.

It is unclear whether the man was killed and dumped Infront of an uncompleted building or died a natural death.

A resident of Kasoa Opeikuma High-tension, Okyere Boateng, revealed that, he was informed by a young man that, a man believed to be in his late 40’s has been found dead.

Okyere Boateng says, they moved to the scene and found the lifeless body in front of the uncompleted house inside the bush.

“Around 2:30 in the afternoon yesterday a boy who was hunting for birds came to inform me.of a foul smell he sensed in the area. We went to search and found a dead body so I informed my pastor and he reported it to the police. They came around 6:30 in the evening to inspect the body. If anyone’s father has travelled and not returned, they should come and disclose,” he narrated.

Meanwhile, the Awutu Senya East Municipal NADMO Director, Kwame Amoah says they have managed to take the decomposed body for burial and calling on Ghanians to contact Ofaakor Police for identication of one man called Kwesi Alhaji.

“I was there yesterday the Kasoa Police Commander called me that there is a dead body at Kasoa Opeikuma High Tension so we should go and check. So we came around 8 pm and found the body but the police said it was late so we should wait for today before they can do something about it. So we came today and found his phone and a susu card bearing the name Kwesi Alhaji. We can’t tell what or who killed him but he was wearing only his supporter (underpant) and his top. Anyone who knows anybody by name Kwesi Alhaji should come out to let the police know,” he narrated.