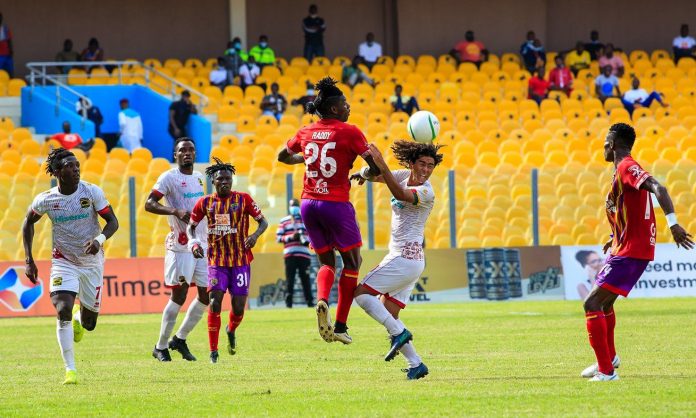 After almost a month Hearts of Oak were crowned champions of the Ghana Premier League, they have been congratulated by sworn rivals Asante Kotoko.

The Porcupine Warriors were mum when congratulatory messages poured in for the Phobians for winning the league for the first time in 12 years.

Hearts beat Kotoko in the tight title race and, on Sunday, the Phobians secured domestic double after beating AshantiGold on penalties in MTN FA Cup final.

A day after the match, Kotoko put rivalry aside for few minutes and praised Hearts of Oak for their achievements this season.

Kotoko tweeted: “Congratulations to Hearts of Oak on winning the 2020/21 Ghana Premier League and the FA Cup titles. See you next season.”

There is a possibility of Kotoko joining Hearts of Oak for Africa next season.

Hearts have surely secured the ticket for CAF Champions League.

However, presently, it is unknown which Ghanaian club would be playing in the Confederation Cup.

Ashgold thought they had qualified after reaching the FA Cup final, but GFA informed them of their ineligibility because they submitted their request to participate in Africa after the July 15 deadline.

Kotoko, who finished second in the league, and Medeama, the FA Cup semifinalists, are the only eligible clubs for CAF’s second-tier competition.