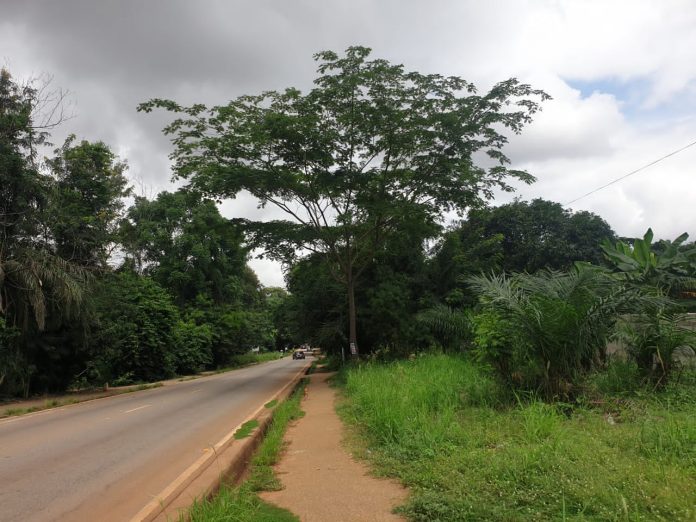 Roads at Danyame and around the Ashanti Regional Coordinating Council (RCC) in Kumasi have become bushy, creating an unhealthy scenery for commuters and passersby.

The weeds were heavily grown and extremely tall, when our news team visited the area during the week.

Drivers plying those routes are calling on authorities to prune overgrown weeds creeping onto the roads around the RCC.

One dangerous thing is that, a road sign post provided to signal drivers of an impending speed ramp has been covered by weeds making it difficult for motorists to use the sharp curve.

In some jurisdiction, such weeds are used as ornamental plants including lawn glasses to beautify the city.

However, the shoulders of the roads around the Ashanti Regional Co-ordinating Council in Kumasi and other parts of Danyame, first class residential area in Kumasi have become nuisance to residents as well as commuters.

The development has made it uneasy for residents to cross the road.

Our news team observed that the weed population was awfully varied as they were several species within the areas visited.

Some of them were even woody plants as mahogany in addition to to other non-woody varieties such as guinea grass, crowfoot grass making the areas almost like a forest.

Aside from utilising the place as a defeacating grounds, some petty merchants who ply their commercial alongside the foremost roads have transformed the place right into a refuse dump.

The weeds at Danyame and around the RCC had grown past the electrical wires and post when the news team visited .

The place has been left unattended to for some months, creating problem for motorists who had to use one side of the roads due to the problem.

Some of the creeping weeds have begun climbing the wires and wire mesh used to stop pedestrians from crossing at unauthorized locations.

This highway connects RCC to Lancaster hotel, then Golden Tulip and other busy areas in Kumasi.

The highway on the RCC to golf park was not an exception .

Gutters within the affected roads at Danyame area have been choked with weeds and plastic bottles preventing free flow of water when it rains.

The situation has resulted in flooding in the area whenever there is a downpour.

A taxi driver, Kwabena Sammy, who spoke to our news team narrated their ordeal to us.

“The place is busy and can’t see anything when driving from the RCC area. It has been in this state for the past three months. It is an eyesore especially when driving in the night. We are appealing to the authorities to do something about this. The weeds have taken over the electrical poles making driving at night dangerous,” he said.

A resident, Haidab Handy, said they have to drive in the middle of the road. He was not happy about the current happenings on the stretch.

”It is very disappointing. This is RCC, class A residential area. Weeds have taken over the road. You have to drive in the middle of the road. I have been to KMA on this but nothing has been done. Gutters are choked and KMA does not do anything on it,” he lamented.

The Ashanti Regional Director of the National Road Safety Authority, Sambiat Wiredu, said such situation often obstruct drivers and pedestrians and see it as a hazard.

“Normally it obstructs motorists and pedestrians forcing them to come onto the road as well as endangering their lives. We at Road Safety see it to be a hazard and need to take prompt action on it. Those in charge should do their mandatory work to save the situation”.

”We normally see these things on our highways and prompt safety engineers. Our attention is gradually being drawn to the urban areas,” she said.