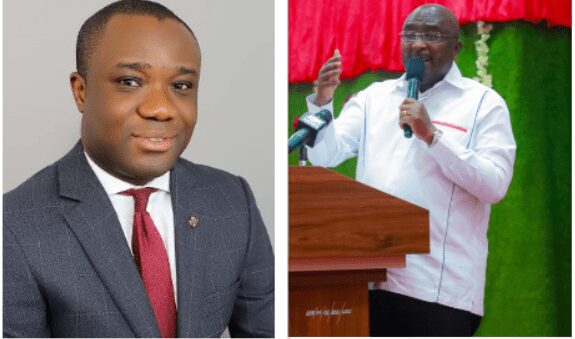 A former Deputy Minister of Communications, Felix Kwakye Ofosu, has dismissed claims by the Vice president Dr Mahamudu Bawumia that although debts levels are high at the moment, the economy has been better managed by the Akufo-Addo administration.

Mr Kwakye Ofosu said the Vice President did not respect the audience that he made this claim to during the TESCON conference in Cape Coast on Saturday August 7.

Dr Bawumia had noted that despite the rising public debt, inflation and exchange rates have gone down due to prudent management of the economy.

The NDC and their Minority lawmakers had said the level of borrowing by the government is too much.

For instance, speaking at a 2021 post-budget workshop for MPs in Ho in the Volta Region, Minority Leader Haruna Iddrisu said the government cannot solely blame the COVID-19 for its poor management of the economy.

“The record is that President Akufo-Addo has increased our debt stock from GHS120 billion to GHS291 billion representing some 76% of debt to GDP.

“He chose conveniently to blame COVID-19 for the poor performance of the economy, and yet he is seeking to recover from COVID-19.”

“You’re managing the economy in a way to look at its impact on these variables; exchange rate, interest rate, inflation and growth rate. That is the issue.

“When the NDC was in government, well way before, they took us to HIPC. They had mismanaged the debt levels such that we had very high inflation, very high exchange rate depreciation, very high interest rate and low growth. That was the legacy they left us.”

He added “By the time we were going towards 2016, the debt levels had increased such that inflation was going up, interest rate was going up, exchange rate depreciation was going up and growth also coming down, and they had to run to the IMF for a bailout. Wasn’t that the case? That was NDC economic management.

Reacting to the Vice President comments, Kwakye Ofosu said in a Facebook post Sunday August 8 that “According to Mahamadu Bawumia, a public debt of GHS 334 billion in 2021 representing 78.9% debt to GDP ratio which has led to the use of 92% of tax revenue to pay interests and amortization on it alone, shows prudent borrowing but a public debt of GHS 120 billion, with debt to GDP ratio of 56% which leads to the use of 28% of revenue to service it in 2016 shows non-prudent borrowing.

“He clearly didn’t have respect for the audience he addressed yesterday.”