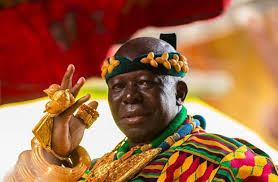 Onua TV/FM’s morning show host, Blessed Godsbrain Smart is calling on the chiefs and overlords of the Ga land to reclaim portions of their lands taken by government over the years.

His call comes on the back of retrieval of some stool lands by the Asantehene in Kumasi, whilst state lands are being hogged by politicians and other individuals at cheaper rates in Accra.

Government has through Executive Instrument (E.I.) 432 of 2021 revested and released a portion of the state land at the Ridge Residential Area in Kumasi to the Asantehene on behalf of and in trust for subjects of the Golden Stool.

The released portion with an area of 409.24 acres contains both privately-owned properties to be maintained and state bungalows to be relocated to the area retained by Government.

The directive says “all leaseholders of private and public residential and other properties within the revested area are also to attorn tenancy to the Asantehene. This means annual ground rent has to be paid to the Golden Stool by all lessees with the coming into force of the Executive, Instrument (E.I.) 432, with the Asantehene possessing the reversionary interest.”

Also, “All Heads of Public Institutions are to take note of the change of status of the land at Ridge Residential Area in Kumasi and to refrain from constructing any new building or redevelop any official bungalow or undertake any elaborate maintenance work on the properties within the enclave.”

It is in this light that Captain Smart, is calling on the Ga chiefs to take back any land given to government that has not been used for the intended purpose.

He says the EI through which Otumfuo got the stool lands can be equally used by the Ga chiefs to also take back their lands.

According to him, some lands must be preserved for native Gas, especially the younger generation. He underscored the need to bequeath them with something to hold on to in the future.

“We say the government can take the lands by an EI. It is the same EI that Otumfuo has used to take his lands back. Otumfuo has shown the way.”

“Why can’t the chiefs leave some of the lands for their younger generation? I am pleading with the Ga chiefs to stop if they’re joking with the Achimota Forest issue.”

He believes the installation of new Ga Mantses in every regime is to give politicians the access to take over the Ga lands.

He quizzed why “every government bring their own Ga Mantse? Rawlings brought his Ga Mantse, Kufuor, Mills, Mahama and Nana Addo all did same. In January 2025, whoever becomes president will also bring his Mantse.”

He extended the call to other chiefs across the country whose lands have been taken by government without using them for their intended purpose to take them back.

“If you’re a chief and government hasn’t used your land for the purpose for which it was acquired, take it back because they’re sharing it for themselves” he urged.