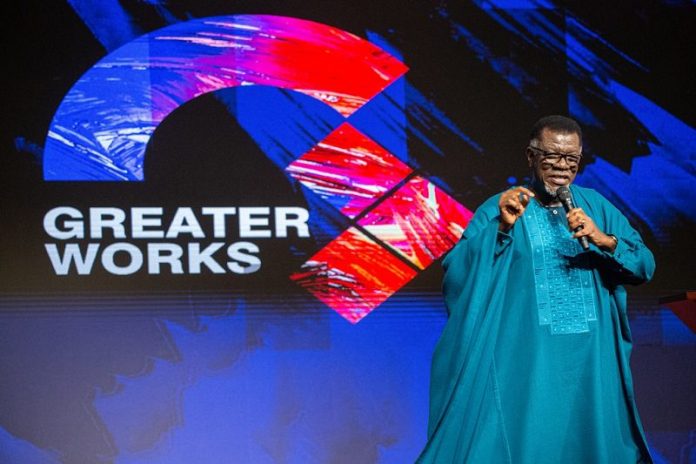 General Overseer of the International Central Gospel Church (ICGC) has charged African youth to take advantage of the Covid-19 pandemic and break through.

“This is the most important moment for Africa’s economic emancipation and the entrepreneurial empowerment of its young men and women,” Pastor Mensa Otabil has said.

Delivering a message titled ‘It’s Coming Down’, the pastor and motivational speaker recalled the biblical account of God leading the Israelites through Joshua to defeat the Amorites by raining hailstones and yet protecting Israel.

Pastor Otabil referenced Joshua 10:7-14 from where Joshua and his army fought the Amorites to possess the land.

He described how the passage used anthropomorphism – the use of human language to describe an act of God.

According to him, God routed the Amorites and moved them noisily to break and destroy their camp.

He said the hailstones, though universally deployed, were intelligently manipulated to protect and give Israel an advantage.

“Peradventure COVID-19 is a hailstone that could give Africa an advantage and we need to seize the opportunities it presents,” he said.

The highly respected theologian posited, “The time to motivate Africa to raise captains of industry is here because a new opportunity has been opened.”

The ICGC General Overseer was speaking on the second day of the annual Greater Works Conference.

Pastor Otabil prayed that African leaders would seize the opportunity to position the continent to catch up with the rest of the world and bridge the developmental gap.

“This is not a time for discouragement, this is the time for encouragement because a door of opportunity has been opened to us.”

He challenged Africans to avoid a self-defeating mindset, but rather strive to increase wealth.

Pastor Otabil wondered how the African continent appears not to have been overrun by the coronavirus pandemic, as previously predicted, compared to other more endowed countries with superior health infrastructure.

He said having copiously read literature that seek to explain the phenomenon with various theories, his only possibly conclusion, albeit not scientific, is that God’s hand of mercy is on a people who comparatively seem to have nothing.

Pastor Mensa Otabil believes God is telling the rest of the world that this is Africa’s season and it is time for a shift.