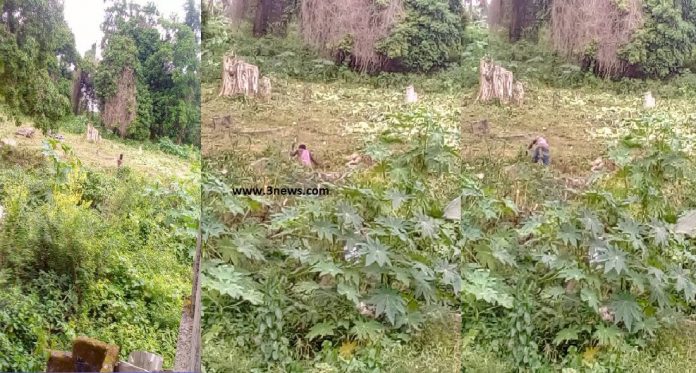 The Apremdo Community in the Effia Kwesimintsim Municipality of the Western Region is on a manhunt for a young man identified as being behind the desecration and looting of several graves belonging to “departed” inhabitants of that traditional area.

For some time now, graves at the Apremdo Community have been looted. Several surveillances mounted to get the architect have been unsuccessful.

However, Wednesday, August 4 will be the day the grave looter will be apprehended.

In a video sighted by Connect FM, a resident, later identified as living close by the cemetery, is heard exchanging words with a young man close to a grave that has been desecrated.

According the resident, he was relaxing in his room when he heard a suspicious noise coming from the cemetery.

To satisfy his curiosity, he craned his head to see what was triggering the noise only to see the young man he will later apprehend busily breaking a tomb.

Chief of the Apremdo Community Egya Kwame XI, in an interview on the Friday, August 6 edition of Connect FM‘s Orekodo confirmed the incident to news anchor William Benjamin Peters.

“The video you saw is a true account of what happened at the Apremdo Cemetery last Wednesday. In fact, the desecration and looting of graves have been ongoing for some time now. But we have not been able to arrest anyone. I had a call on Wednesday and I was told that a young man by name Adofo, who is from Apremdo, has been arrested at the Catholic side of the cemetery breaking a tomb. In fact, I am told the tomb is a fresh one. To the extent that currently a pungent smile from the grave has engulfed the area”.

Regrettably, the Chief explained that the young man could not be handed over to the police following an intervention from his mother.

“I am told that someway, somehow the mother of the guy was able to convince those who arrested him to hand him over to her. According to them, the mother explained that his son is known in the community and also easy to find. Therefore, they should hand him over to her with the assurance that anytime they needed him she will produce him.”

He added that with that firm assurance, the young men in unison allowed the mother to take her son away.

“Unfortunately, when the team went to the house the following day to pick him to the police station, the young man was nowhere to be found. When they asked for his whereabouts, the mother told them she had not seen him.”

The Chief indicated that a search party is currently on the lookout for the young man and assured that everything will be done to “smoke him out of whether hole he has gone to hide in”.

“Because he has so many questions to answer. We do know that he is mentally sound. When he was arrested, he had a jute bag on him. But then again, the young men could not take it from him.”

Meanwhile, he stated that efforts are underway to identify and inform the family of the buried person whose tomb has just been desecrated.