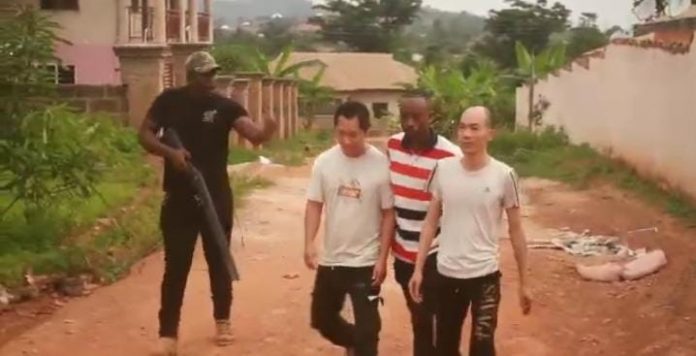 Ten Chinese nationals and two Ghanaian accomplices have been arrested by the Counter Intelligent Unit (CIU) of the Office of the President Annex for engaging in illegal mining in parts of Kwahu enclave.

Several arable lands in the Kwahu enclave have been destroyed by the activities of illegal miners.

On Wednesday, July 27, 2022, the Counter Intelligent Unit of the Office of the President Annex, arrested ten Chinese Nationals and two Ghanaians for illegal minning.

They impounded seven excavators and weapons.

The Operation Commander for the CIU, Nii Nortey cautioned illegal miners and warned foreigners must not be indulged in illegal mining.

“President Akufo-Addo would not relent on his campaign to fight illegal minning. We want citizens to stop aiding foreign Nationals especially Chinese to engage in Illegal minning. It’s wrong. The excavators have been impounded,” he said.

The operation by the CIU was in response to address a plea from Kwahu Obomeng Chief Nana Effah Opinamang.

He wrote to the Presidency, to help put a stop to illegal mining on his lands under the Obomeng Traditional Area.

The Chief charged the CIU to regularly visit the area to keep off illegal miners.

“Several security unit such as Vangaurd and the rest have come and gone, but the illegal minning still persist. I hope this particular intelligence unit continues its work effectively. Cocoa production in the area has declined. Farmers are lobied to give out farm lands for illegal minning in exchange for few cedis. Its disheartening,” he cried.

He said “I have been accused of engaging in minning, but today, I have been vindicated. Minning in Itself isn’t illegal. But the way some people go about it, you must get permits. Mine, reclaim the land and plant tress, that’s responsible minning”.

The Nkawkaw Divisional Police Commander Rev. Dr. Adane-Ameyaw, warned miners without proper documentation and those who mine irresponsibly would be dealt with.

“I am warning all those engaging in the illegal minning on land and in the river bodies. We will come after them. They cannot destroy natural resources illegally. They need permits. We will arrest and prosecute whoever is found guilty,” he indicated.

W/R: 10 illegal miners, including a Chinese arrested at Dominase