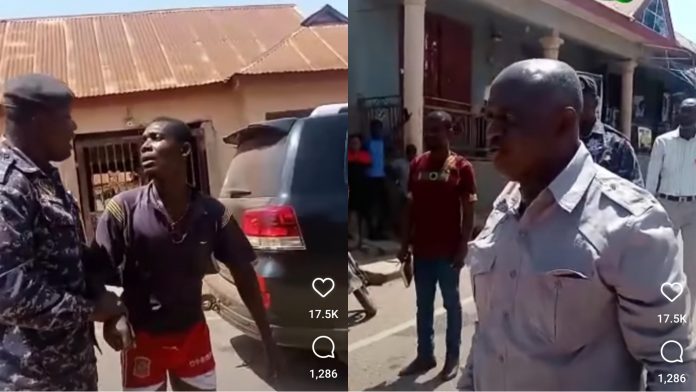 Ashanti Regional Minister, Simon Osei Mensah has caused the arrest of one person at Ntobroso in the Atwima Mponua district of the Ashanti Region.

The minister, who was in a convoy stopped on the way when he saw cocoa beans being dried on the asphalted road.

The livid minister asked the men to take the beans off the road.

Whilst at it, one of the men said “this is not galamsey and it won’t destroy the road.”

In a response, the furious minister asked “is this not more than galamsey?”

When Mr. Osei Mensah said he was a good man to arrest them for drying the beans on the road, one of them said he could go ahead since he will definitely be released when arrested.

The minister got more furious and ordered for his arrest. Even though people tried begging for the minister to ignore the man for being drunk, Mr. Osei Mensah was adamant and still got the drunken arrested.

Whilst many are applauding the minister for arresting the man, others are saying he should extend his anger to the ‘galamseyers’ in his region who are destroying forests and polluting water bodies.