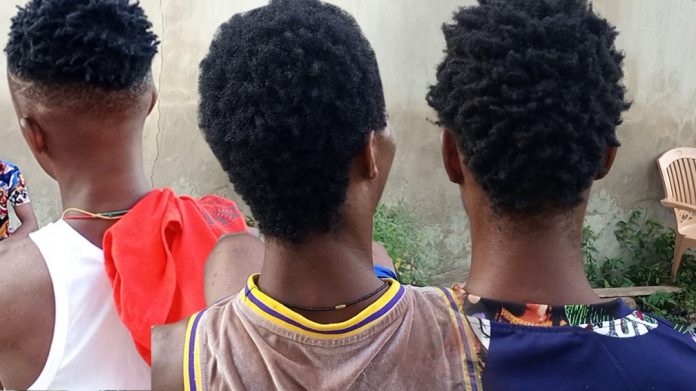 A call has been made for Ghana’s laws to look at alternatives instead of incarcerating people for substance abuse.

This was made by the Executive Director of POS Foundation, Jonathan Osei Owusu at a workshop on the Narcotics Control Commission Act 2020 (1019) for Law Enforcement and Police Prosecutors.

He believes substance abusers should be helped with rehabilitation whilst traffickers are rather prosecuted.

Perhaps, this is amply demonstrated in the Inchaban Community of the Shama District of the western region.

It is a normal sight to see youngsters, some as young as 13 years smoking weed in the Upper Inchaban Community.

They say weed is their life and nothing will stop them from enjoying their past time.

They sit in groups and wait for their suppliers who turn up without fail to feed their addiction. To these youth, that is their life line.

Upper Inchaban is a peri-urban community filled with a mixture of old and new architectural structures. Unfortunately, it has gained a notorious reputation for substance abuse and trafficking. Many of the youth here, it seems, are into substance abuse and do so boldly and openly.

During our TV interview where we asked them to turn their backs to the camera to ensure their privacy. They insisted on looking into the camera as they had nothing to hide.

“I want people to know who you are talking to, I have nothing to hide. I am not stopping smoking weed any time now. Because weed makes me feel liberated. Bring a hundred million cedis and more here, even that will not dissuade me from smoking weed”.

“Smoking weed has enlightened me. I have now reached a higher level”.
“I would have stopped if it had not helped me. Even my mom and doctors advise me to stop because I am asthmatic but I tell them it is medication for asthma”… , they said.

Assemblyman for Upper Inchaban, Alhaji Yahaya Hussain, seemed to have thrown his hands into the air about the whole situation.

According to him, he had received little support from the community in dealing with the situation. So he had given up. He revealed that he had tried his best but to no avail.

“Interestingly, whenever we try to arrest and deal with them, crimes such as mugging rise in the community. Traders returning home are mugged by these boys on a very popular bridge, Stamford bridge, that provides a shorter route into the community. But when we leave them, they also leave us in peace.”, he stated.

One thing was clear. These boys are addicted to the weed and need to be helped. Perhaps it is time to heed to the call of POS Foundation for the law to look at rehabilitating substance abusers as incarceration seems to be failing.

The plea for pardon

Executive Director of POS Foundation, Jonathan Osei Owusu thinks if care is not taken, we will end up criminalizing poverty.

“If we continue to push some of our young people into prison for youthful exuberance, when some of them can come out of addiction through our help and support, at the end of the day, look at the congestion in the prisons, what good will it do for this country? he asked.

“It is our humble appeal that we should look at other alternatives to incarceration for substance abusers”
“We have made a call to the president and we will make it again; those who have already been imprisoned for not trafficking drugs but usage, (the law has been assented to by the president,) can we have some level of pardon, to give them a second chance to come back to society to care for their families?”

“… this will be a lesson to them and so we ask that the law be taken back on the calendar of the president to let it affect our brothers who have already been incarcerated”, he stated.

The POS Foundation gains international recognition at The Hague, Netherlands