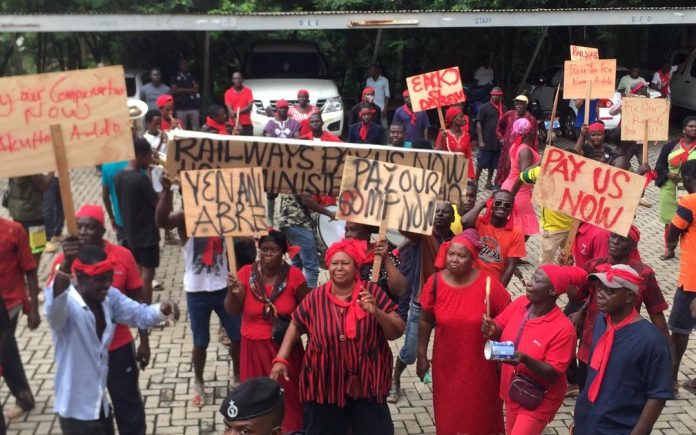 Residents of New Akrade and Senchi are demanding a land compensation due them on a 25-acre land affected by the Tema – Mpakadan railway project.

The affected residents numbering over 100 are angry that the undue delay of the land compensation is hindering their relocation coupled with it’s associated impact on water and community roads.

They have given the Railways Development Ministry 21 days to respond to their demand.

On Tuesday, September 20, 2022, the residents led by the Akrade Queen Mother, Nana Samanko III, protested with placards to convey their displeasure.

”Pay Us now” “Railways Ministry Pay Us” “Ye ne Abre” “We need our Land Compensation” among others were some of the inscriptions on the placards.

“My people need to be paid their land compensation. It’s been too long.The roads in my community have worsened. We can hardly get access to potable water to drink too,“ she lamented.

The affected residents said the delay of the land compensation has affected their relocation plans and livelihood .

“The land compensation money has unduly delayed. Only the structures have been paid for. We need the full money to enable us continue our livelihood and our project where we have relocated. Cost of materials keep increasing. How do we survive? We will be forced to stop the work and picket at the Railways Ministry if they fail to respond to our demands in 21 days,“ one of them indicated.

Another addded “the houses close to the project are in danger. Beneath is cracks developing from the project. We fear they may cave in soon because we see cracks in rocks down there.”

He explained engagements between them, the Lands evaluation division of the Lands Commission and the Railway Development Ministry for the past four years has not yielded results.

“Since our Lands were acquired by EI 23 of 2019 for the construction of the Tema -Mpakadan railway line project , we had no option but to clear from our land for this important national project. A year later in August and September 2020 our crops and buildings were valued and paid with the exception of two structures and two crop farms whose owners rejected the valuations. Our lands remained unpaid for a very long time despite several demands from the Lands valuation division of the Lands Commission.

They also expressed their dissatisfaction with the delay in payment as against the laws of the land.

The Asuogyaman DCE Samuel Kwame Agyekum asked the affected persons to exercise restraint as he forwards their demands to the Ministry for immediate action.

“I am happy you mentioned it is an important national project. It would benefit us and everyone along the project. I know your land compensation has delayed. I urge you to exercise restraint and be patient the money will come,“ he assured.