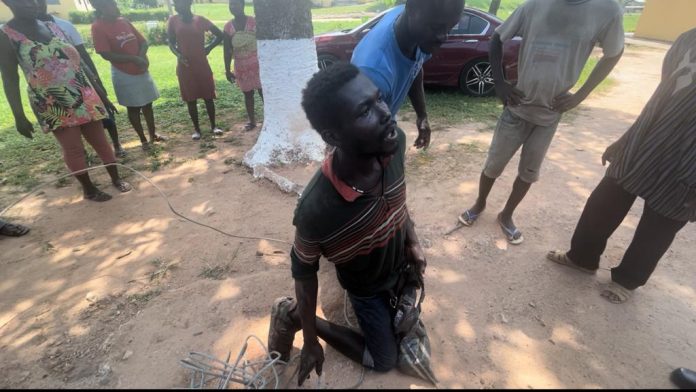 The alertness of residents of Essipon in the Sekondi Takoradi Metropolis of the Western Region has led to the arrest of a young man suspected to be among a syndicate behind the stealing of ECG cables in the area.

According to the residents, the thief who gave his name as Sumaila Abdullah was spotted around the incident area with another colleague at about 1:00pm Monday afternoon. Their movements became suspicious after the residents had monitored them for some time.

“They were just patrolling the area as though they were on the lookout for something,’’ one resident recounted

Since they were not known members of the community, the residents decided to keep a close eye on them. The two entered the bushes under one of the distribution lines of ECG.

Within minutes, the residents indicated they saw one of the cables hanging loosely. The residents rushed on the two and saw Sumaila folding a cable.

“We tried to arrest them but a fight ensued. I was able to overpower Sumaila and restrain him. Unfortunately, my other colleague could not overpower the other thief. In fact, in the struggle, the thief bit my colleague. Because I was then restraining Sumaila I could not go and help him. And so, he managed to escape,” Kweku Essiam narrat

Other residents lamented how they have to spend thousands of cedis to replace their electrical appliances due to the activities of the thieves.

“If you go to my house right now, you will see their handiwork all over. My air condition cable and other cables have all been cut. Now I have to spend several cedis on repair works. Most of my appliances have been affected. The past three months have not been easy for us here. Almost every week this thing happens”, a resident, Adamu Seidu lamented.

Western Regional Public Relations Officer for the ECG, Benjamin Quarcoo encouraged residents to keep being vigilant so as to help arrest persons who have targeted their installations.

“First, the young men who bravely arrested the thief deserves our commendation. We will also continue to encourage residents to be on the lookout for people who act mysteriously around ECG installations. It is our desire to supply uninterrupted power. But these activities thwart our efforts and result in unexplained outages,” he said.

The thief, sumaila Abdullah, has since been sent to the Sekondi Police Station.

C/R: Dog barks to cause arrest of ECG cable thief

Sekondi Tdi: Bye-law to make landlords paint their houses at least once in every 5 years to be implemented

W/R records highest coronavirus cases in a day in 2021