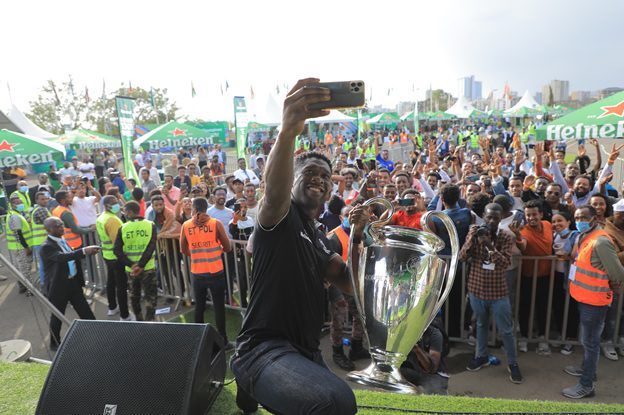 Heineken, official sponsors of The UEFA Champions League (UCL) since 2005, recently launched the biggest tour of the UCL trophy in Africa for the 2021/2022 season.

For football fans across the continent – 400 million strong – that was a much anticipated off-the-pitch experience. Packed with match viewing experiences, the continent-wide tour included photo sessions with football legends and fans, press parleys in all four tour stops in Nigeria, Mozambique, Ethiopia, and Democratic Republic of Congo. Fans from Congo Brazzaville and Rwanda also got to attend the DRC and Nigeria tours respectively

Every year, Heineken hosts exceptional match viewing experiences and activations for millions of football fans and beer lovers in Africa to inspire a new generation of football fans and build appreciation for UCL and the beer brand. This year, the experience signaled a return to normalcy after the two-year period of the Covid-19 pandemic.

Africa represents one of the largest fan base for European football and especially the UEFA Champions league.

Speaking on why Africa was chosen for this tour, the Director of  Sponsorships, Heineken, Hans Erik Tuijt said, “Africa is a significant football region for good reasons. There are five billion football fans around the world, with Africa representing one of the largest fan bases across the globe. Undoubtedly, football is the most popular sport in Africa with an estimated 400 million Africans regularly tuning in to watch the UCL every season.”

One of the most successful players in UEFA Champions League history and one of the most decorated Dutch players in history, Clarence Seedorf took Africa by storm in the custom Heineken plane alongside competition winners.

Seedorf is revered, as he is the first, and currently the only, player to have won the Champions League with three clubs – once with Ajax, in 1995, once with Real Madrid, in 1998 and twice with AC Milan, in 2003 and 2007. Regarded by many as one of the best midfielders of his generation, in 2004, he was chosen by Pelé as part of the FIFA 100.

Seedorf was on the entire tour as the UEFA Champions league ambassador and made it a duty to inspire a generation of young African footballers who have a dream of reaching the highest levels of their footballing career.

Drawing from his own roots as a boy from Suriname, Seedorf connected with the fans and people of Africa across all the countries, sharing stories on his background and offering inspirational messages to the people and leaders on the continent.

It was the UEFA Champions league trophy’s biggest tour of Africa yet – The excitement on the streets of Kinshasa, amazing orchestra and fireworks in Maputo, inspirational football match with the national U-23 football team in Addis Ababa, Heineken branded aircraft and a legendary friendly match and music performances in Lagos. The tour had it all.