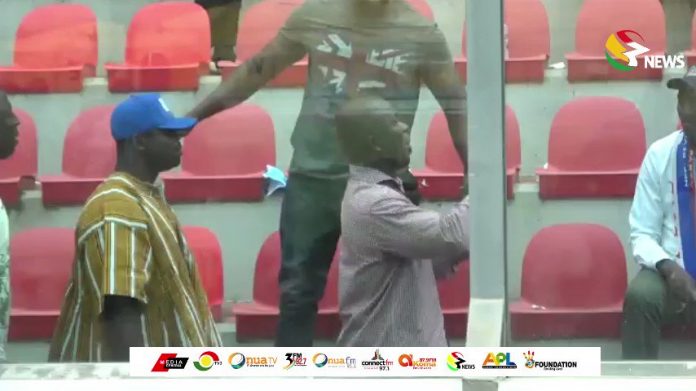 With election of regional executives for the ruling New Patriotic Party (NPP) ongoing, Kwabena Nyame, a popular serial caller for the party has invoked a deity to curse delegates who intend casting their votes for the incumbent Chairman of the Ashanti Region.

In a video taken at the Baba Yara Sports Stadium where the polls are ongoing, Mr. Nyame is seen pouring out a liquid substance from a schnapps bottle in front of some delegates at the stadium.

Even though the audio from the video is not very audible, Onuaonline correspondent, William Evans Nkum, who spoke to some people whose feet the curses were invoked revealed the move is to deter aspirants from casting their ballots for Bernard Antwi Boasiako, aka Chairman Wontumi, in the ongoing elections.

Some people who are suspected to be supporters of Chairman Wontumi were seen countering the process but to no avail.

The Annual Regional Delegates Conference of the NPP started Friday, May 27, where some regions elected their executives with the remaining ones taking their turns today.

Voting is currently ongoing in Greater Accra and Ashanti regions.