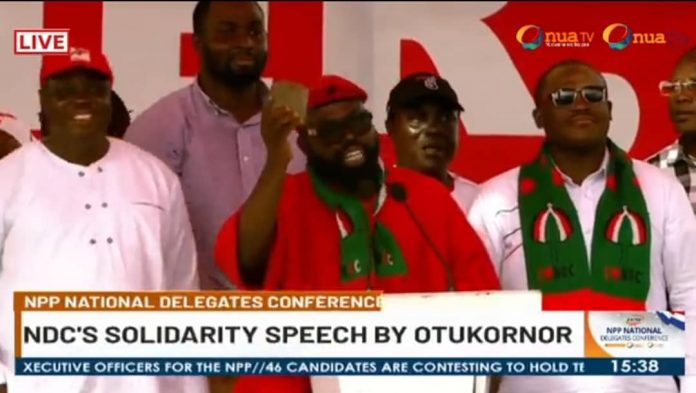 A ball of kenkey is now sold for ₵5.00 were words uttered by the Deputy General Secretary of the National Democratic Congress, Dr. Peter Boamah Otokunor to buttress his assertion of how poor the NPP have managed Ghana.

In his party’s solidarity speech at the New Patriotic Party’s conference, he displayed a ball of kenkey on the podium saying the leaves of the kenkey alone cost GH₵3.00, which is more expensive than the dough itself.

To mock the magical prowess and ascribed importance of the Ghana card as held by Vice President Bawumia, the NDC General Secretary said he purchased the kenkey with the national ID.

“When we were coming, I decided to buy a ball of kenkey. This ball of kenkey sells for ₵5. The leaves of the kenkey alone will be ₵3, more expensive than the kenkey itself. And guess what ladies and gentlemen, I bought the kenkey with my Ghana card,” he mocked.

Vice President Mahamudu Bawumia has said he would choose the Ghana card over 100 interchanges, saying the numerous functions of the card makes it the cradle for Ghana’s development.

This sparked a craze on social media where many citizens claim they are able to use the card for so many things considering the extreme importance the Veep attaches to it, to the extent of rating the card above 100 interchanges.

Meanwhile, Dr. Otokunor believes the NPP has been better placed in Ghana’s political history in terms of revenue generation than any other political party in the history of Ghana but have nothing to show for what they’ve been able to do with it.

“The NPP remains the luckiest political organisation in Ghana, having to enjoy undeserving level of goodwill from the people yet have only offered poor, incompetent leadership leading to the current economic meltdown and hardship for all Ghanaians.

“The NPP government is privileged to benefit from a total of about GH₵500billion in revenues and about GH₵400billion in borrowed inflows compared to some meagre GH₵200billion that accrued their predecessor, the nation builder, John Dramani Mahama. Incidentally, Ukraine Russia war and Covid-19 have become the whipping board,” he stated.