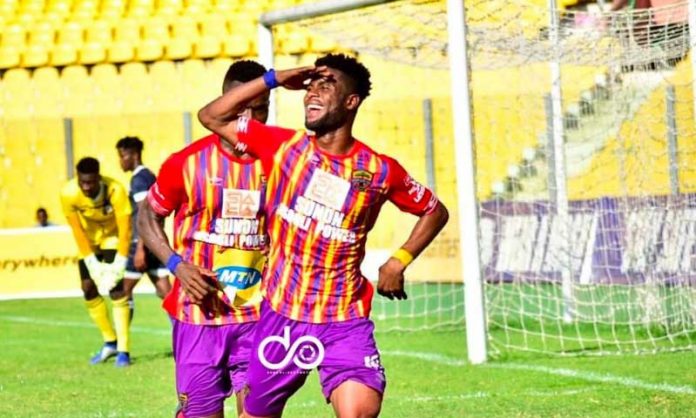 Accra Hearts of Oak Forward, Daniel Afriyie Barnie, has jestingly quizzed a sports journalist if he would refuse an offer to work with the British Broadcasting Corporation (BBC).

His question was a response to a question a journalist had posed to him at the post match conference at the Baba Yara Sports Stadium after helping his team lift the FA Cup.

At the press conference, the journo asked that: “Your performance this year has been impressive and many of you leave for foreign clubs after few successful seasons here. Would you leave if a foreign club shows interest?”

In his response, the FA Cup match winner for Hearts of Oak also asked: “Which media house do you work for? If BBC come for you now I hope you’ll accept the offer?”

The response turned the entire presser into laughter when the striker’s response of accepting a foreign offer was given in that quizzical manner.

Hearts of Oak defeated Bechem United 2-1 to win a record 12th FA Cup title extending their record as the most successful team in the tournament.

The Phobians came from behind to win the game after going down in the first half through Emmanuel Avornyo.

Caleb Amankwah scored from a volley in the last minute of the first half to get the equalizer for Hearts of Oak as the first half ended with the two teams sharing the spoils.

Afriyie Barnie scored in the 60th minute to put the Phobians in the lead with a world class finish during the second half.

Bechem United’s Augustine Okrah was sent off in the 68th minute for head-butting the assistant line one.

Hearts of Oak will represent Ghana in the CAF Confederation Cup next season for winning the FA Cup.