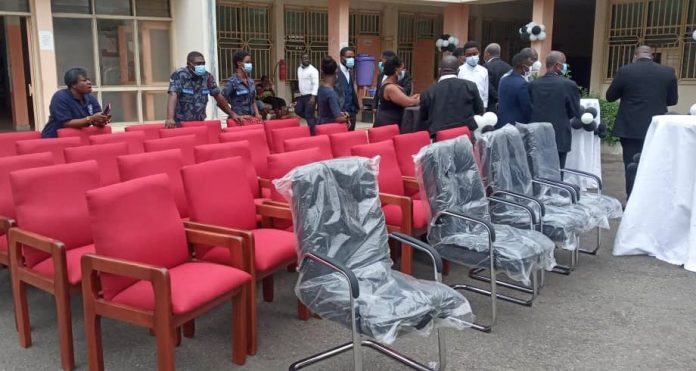 President of the Western Region Bar Association Samuel Kwesi Agbotah has revealed that inadequate furniture is hampering effective activities at some of the courts within the Sekondi-Takoradi metropolis.

Some of the courts either have some chairs broken or not having enough to enable the court users access them in the much-desired convenience, he said.

According to him, there have been several instances where both lawyers and their clients found themselves on the same seat due to the situation.

As a result, members of the Association have made a donation of 30 chairs for distribution to the five high courts of the metropolis.

The items, which cost about GH¢30,000, were officially handed over to the court at a short ceremony, which coincided with the legal vacation cocktail event.

Lawyer Kwesi Agbotah said the items were realized from personal donation of members and forms part of their contribution towards the effective discharge of their functions.

He added that members are not oblivious of the several challenges facing the judicial service in terms of the provision of the needed logistics and the Association will therefore do its best towards addressing some of these challenges.

Supervising High Court judge Her Ladyship Hannah Taylor was full of praise to members for their kind gesture.