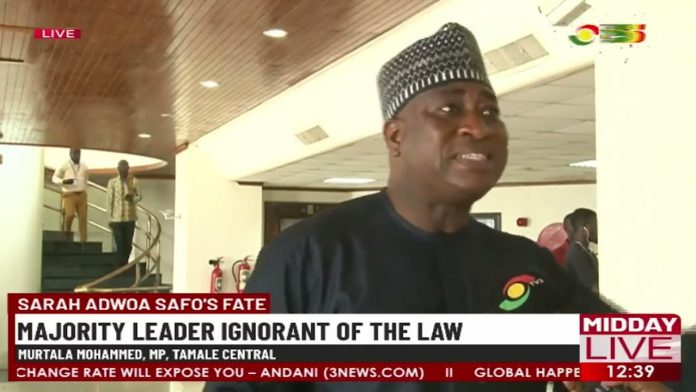 Tamale Central Member of Parliament Ibrahim Murtala Mohammed has taken a swipe at the Majority Leader in Parliament Osei Kyei-Mensah-Bonsu for indicating Speaker Bagbin’s understanding of the law in handling absentee lawmakers, is wrong.

Mr. Mohammed indicated the Leader of Government Business in the House has gained notoriety for verbally attacking the Speaker at the least opportunity.

While addressing the press after the Speaker’s ruling on Dome Kwabenya Member of Parliament, Sarah Adwoa Safo, Wednesday, October 26, Mr Kyei-Mensah-Bonsu who is MP for Suame said “the speaker is totally wrong in his understanding of the law. That is why I repeated that he has sent us on a very obsequious path, it doesn’t help Parliament.”

Mr Bagbin had ruled that Parliament will debate on the removal or otherwise of Dome Kwabenya Member of Parliament Sarah Adowa Safo.

Delivering his ruling in Parliament on Wednesday, Speaker Alban Bagbin said “the House is well within its right to receive and consider the report from the committee and make a determination.

Sarah Adwoa Safo absented herself for more than the stipulated 15 days in Parliament.

The Majority caucus wanted her seat to be declared vacant but this was opposed by the Minority, who felt she should be heard first.

The Speaker also questioned the authority of the New Patriotic Party (NPP) MPs to declare her seat vacant.

In March this year, Majority Leader Osei Kyei-Mensah-Bonsu disclosed that Sarah Adwoa Safo had requested a month-long leave from the House.

Subsequently, the Speaker referred her case and that of two other MPs, Henry Quartey, MP for Ayawaso Central and Kennedy Agyapong, MP for Assin Central, to the Privileges Committee for hearing.

Speaker Bagbin, who deferred ruling on the matter before Parliament went on recess, promised to do so when sitting resumes.

In a formal communication to the House on Tuesday, the Speaker noted because there were few things to transact just after the assumption, he deferred the ruling to Wednesday.