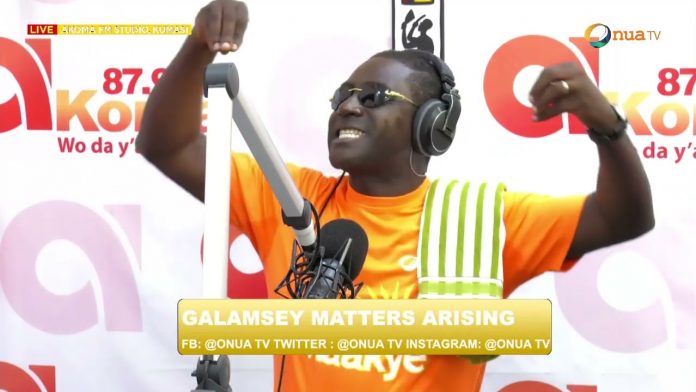 Ten (10) Members of Parliament from the New Patriotic Party and eight (8) from the National Democratic Congress are engaged in illegal mining, otherwise known as galamsey, Captain Smart has alleged.

Speaking about the increasing rate of the canker and government’s failed efforts in curbing it, Captain Smart indicated the involvement of the legislators in the act impedes the campaign.

Speaking further, Captain Smart noted some big wigs in the party have themselves involved in the pointing of accusing fingers, citing each other for indulging in the act.

A 1St Vice Chairman of the NPP in the Central Region, Ekow Ewusi had mentioned Prof. Kwabena Frimpong Boateng, a former Science and Environment Minister as doing galamsey.

The son of Prof. Frimpong Boateng is also doing galamsey according to Captain Smart.

He said the Minister also mentioned Ekow Ewusi as an illegal miner.

Also, a community in the Bosome Freho district of the Ashanti Region have mentioned a certain Asante Bediatuo from the Jubilee House as sending people to do illegal mining there.

Immediate past General Secretary of the ruling New Patriotic Party, John Boadu is also into galamsey.

Member of Parliament for Assin Central, Kennedy Ohene Agyapong has named the National Organiser of the NPP, Henry Nana Boakye as also a member of the galamsey cartel in government.