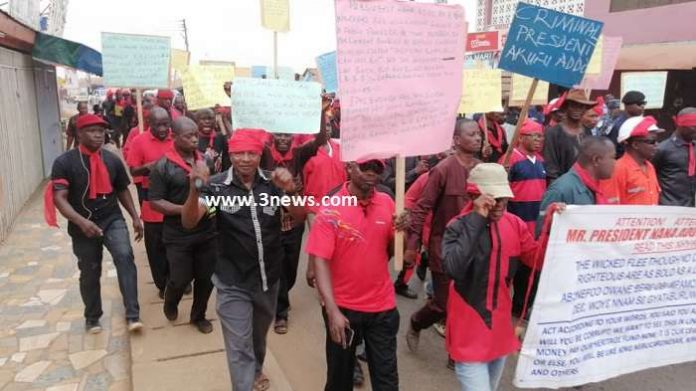 A group calling itself Aggrieved Public Sector Workers has hinted at hitting the streets and demonstrating to reject the 4 percent salary increment government has proposed for public sector workers.

The aggrieved workers want salaries of public sector workers to be increased by 25 percent instead of the 4 percent.

Leader of the aggrieved workers Norbert Gborgbortsi speaking on Akoma FM‘s current affairs and political show GhanAkoma Monday, August 9 bemoans that “there is no equity and fairness in the recent salary increment. How can others receive 79 percent increase and we the tax payers will only see 4 percent surge?”

The group, having over 30,000 members, say it will hit the streets on Wednesday, August 18 if nothing is done to adjust the 4 percent to at least 25 percent.

Mr Gborgbortsi told host of the show Aduanaba Kofi Asante Ennin that “we have already petitioned Parliament, nothing new has come up. So, we have notified the police about our intention to hit the streets so every arrangement is line so government must expect our demonstration because with all the additional tax introduced this year only 4 percent has been added to our salaries. It’s nothing good to write home about”.

The group further urged all public sector workers to come on board and fight for what is due them.