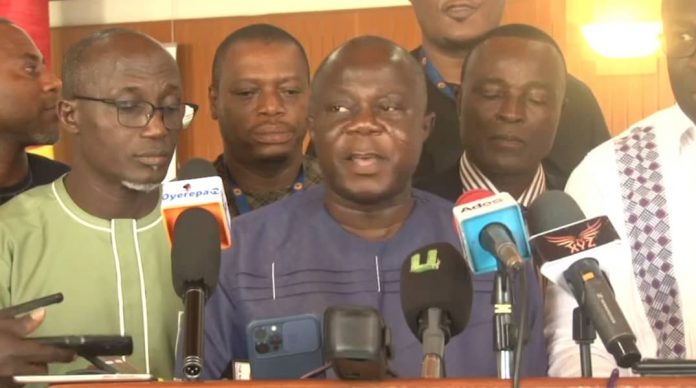 The Ashanti Regional MPs Caucus have asked those involved in the hooting and pelting of Osei Kyei-Mensah-Bonsu to apologise for their deed.

Irate youth on Monday vented their spleen on Majority Leader, pelting him with stones and sachet water over abandoned roads in the Suame constituency.

The caucus says if the constituents were privy to the loans the House had approved to cater for some projects in the region, what happened wouldn’t have happened.

Chairman of the caucus, Kwame Anyimadu Antwi speaking to the media in Parliament condemned the act and asked that the constituents exercise restraint.

“…So we’ll call upon those that actually did this to apologise, meet their leadership and apologise. I’m sure if they were informed of the various loans that have been approved by Parliament yesterday, what had happened wouldn’t have happened,” he said.

He noted the NPP government has undertaken numerous projects in the region but for the absence of contractors on site, they would have been completed by now.

“We acknowledge the fact that we’ve done a lot of projects in the Ashanti Region and for lack of time we may not be able to mention all.

Most of the projects, contractors have not been on sight and people are calling us that we call upon the government to make sure that the projects are completed.

We also heard some people shouting that “yato aba anu yɛnho”, [to wit ‘we have regretted voting’] we call on all our supporters within the region to actually exercise restraint,” he disclosed.

He further indicated to residents of the region that: “It is not that we are looking on unconcerned. But it is just unfortunate that this Suame issue should be addressed in such a manner. This issue has been before Parliament. For instance the interchange at Suame and there are other roads that are supposed to be completed.

“Yesterday Parliament approved a loan to complete these projects and this is inclusive of Konongo – Ejisu road to be dualised and government has a plan of dualising Accra to Kumasi and these are to be done in phasing.”