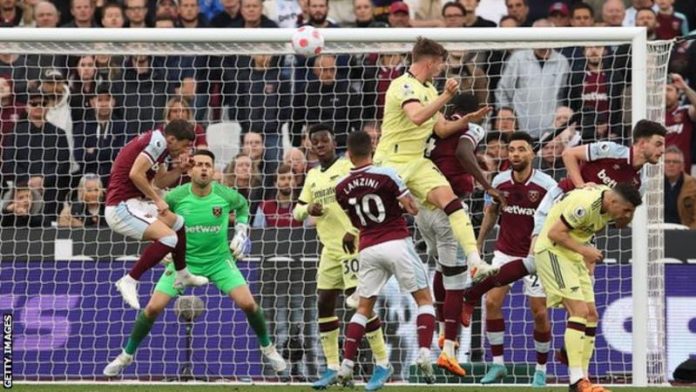 Arsenal boss Mikel Arteta said it was the sign of a big team to be able to win ugly as the Gunners beat West Ham at London Stadium to reclaim fourth spot in the Premier League.

The Gunners knew only a win would lift them back into the Champions League places after Tottenham beat Leicester earlier in the afternoon, but Mikel Arteta’s side responded by grinding out an important three points.

It was Arteta’s centre-backs who came up with the goods, with Gabriel Magalhaes nodding the winner early in the second half after Rob Holding had opened the scoring from Bukayo Saka’s 38th-minute corner.

“If I have to use a word it would be we won ugly. Big teams have to find a way to win ugly when they don’t play well.”

Speaking on Sky Sports, he added: “We found a way through set pieces and defending strongly. To win here at West Ham is credit to boys and shows the spirit we have.”

Jarrod Bowen did pull the Hammers level just before the break, controlling Vladimir Coufal’s cross and squeezing a strike into the bottom corner in what was a reward for a strong first-half performance.

But David Moyes’ outfit failed to reach those levels after going behind for a second time – and defeat leaves them seventh, three points behind sixth-placed Manchester United with three games remaining.

Lacazette to leave Arsenal at end of month