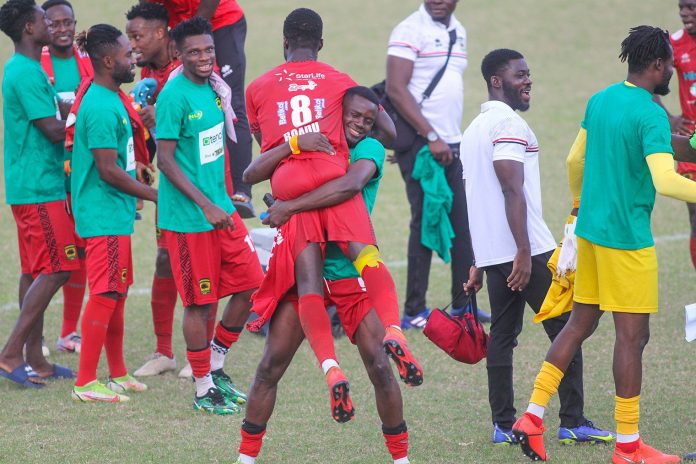 Asante Kotoko continued their march towards a 25th Ghana Premier League title as goals by Andrew Kwadwo Appau and Franck Mbella Etouga earned them a 2-0 win at Medeama on Sunday.

Appau scored the first goal after 23 minutes. Etouga rounded the goalkeeper and fired in the second on the stroke of halftime to give Kotoko their first victory over Medeama in Tarkwa since 2014.

Etouga’s goal made him the league’s first player to reach 20 goals since 2013. In the race for the golden boot, he is one goal ahead of AshantiGold’s Yaw Annor.

After assisting Etouga’s goal, Mudasiru Salifu was sent off, forcing Kotoko to play the entire second half with 10 men.

But they were resolute to secure three points and are one win away from winning the championship for the first time since 2014.

The victory means Kotoko have 59 points and hold a 9-point lead at the top over closest rivals Bechem United and Medeama. Fourth-placed Hearts of Oak trail Kotoko by 12 points.

With a better head to head record against all three teams, a defeat for Hearts of Oak on Monday against Karela United will mean Kotoko are champions even if they lose their remaining four games.

Meanwhile, Elmina Sharks have been relegated after a 3-0 loss to Berekum Chelsea at the Golden City Park.

WAFA were held to a 1-1 draw by Bechem United in what was a must-win game for the Sogakope boys, who are in the relegation zone.

King Faisal scored in the 99th minute to earn a crucial point against Great Olympics at home.