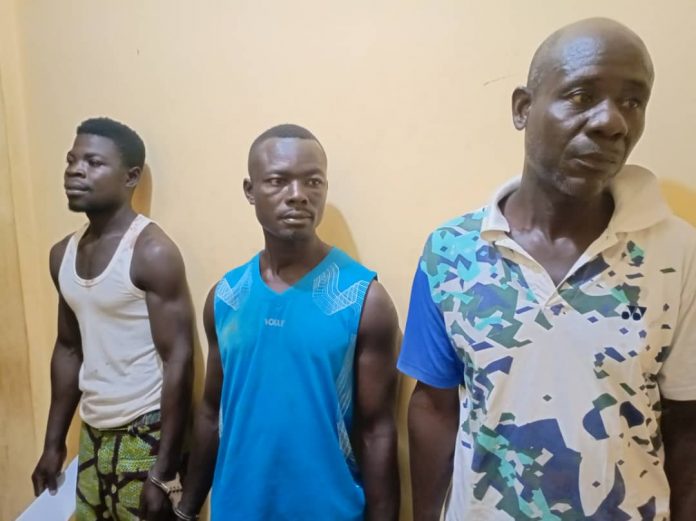 The Mankessim District Magistrate Court has remanded three accused persons into one month prison custody for allegedly lynching a neigbour suspected to be a plantain thief at Mankessim Krofu in the Central Region.

The incident which took place on May 7, 2022 occured at a bush near the Mankessim Health Centre.

The deceased has been identified as Caleb Ocran, a resident of Mankessim Krofu.

The deceased who was tied to a palm tree and stoned to death by the suspects was among a gang of four who were alleged to have been stealing goats and farm produce in the community.

During their last robbery operation, three members of the gang escaped when being pursued by the suspects but lack eluded Mr. Ocran who received instant justice upon apprehension.

Police however retrieved one of the suspects’ phone from the crime scene.

Upon switching on the phone, the suspects called claiming ownership of it and were asked to meet at an agreed location to collect it.

On May 25, a team of community police and uniform officers were deployed to effect their arrest when the suspects showed up to collect their missing phone.

Upon police interrogation, the suspects confessed to have committed the crime indicating the deceased and his colleagues once stole their goat but attempts to catch them were not successful.

They further told the Mankessim police that when they had the opportunity to catch the deceased during their next robbery expedition, they were compelled to lynch him adding that the plantain found at the scene was delibrately put there to mislead the public.

The Court presided over by Her Worship Bernice Mawusi refused to admit the plea of the trio and remanded them into prison custody to reappear on July 1, 2022.