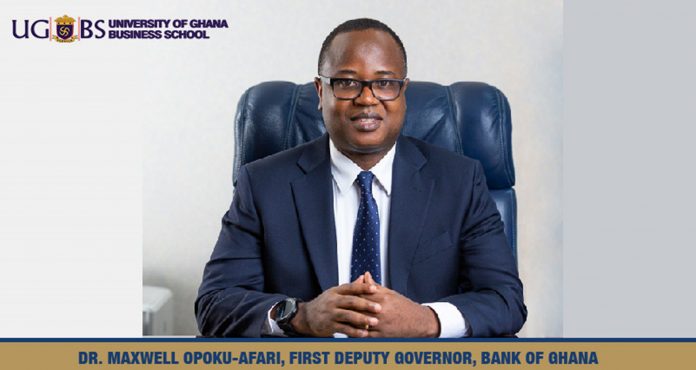 The First Deputy Governor of the Bank of Ghana (BoG), Dr. Maxwell Opoku-Afari, delivered a guest lecture to some students in the Finance Department at the University of Ghana Business School (UGBS), hosted by Professor Joshua Y. Abor.

His lecture focused on the conduct of monetary policy in Ghana and the considerations behind the choice of the recently implemented policy framework. Dr. Opoku-Afari is currently the Corporate Executive in Residence (CEiR) for the 2020/21 academic year at the Department of Finance at UGBS.

Dr. Opoku-Afari’s lecture begun with an overview of the current monetary policy framework that the Bank of Ghana operates with. The said framework, known as the Inflation Targeting Framework (IT), was formally adopted in May 2007 after its introduction in November 2002.

Dr Opoku-Afari stated that some of these benefits include its ability to reduce the level and variability of inflation and output by minimizing the inflation bias (the point where inflation is always very high) and serve as a nominal anchor for monetary policy (its ability to hold down prices and prevent them from becoming very variable).

He explained that the focus of the IT framework is to ensure price stability.

This typically reflected strong fiscal dominance; the deficit created by the budget that the Central Bank had to finance, which increased money supply and undermines the Central Bank’s mandate in ensuring price stability.

As a result of this, the Bank of Ghana decided to implement the current monetary policy regime.
The adoption of this framework began with the passing of a new BoG Act, 2002 (Act 612) which conferred authority on the BoG to implement independent policies. He again added that the current framework was designed to engineer a switch to low inflation and exchange rate stability through increased coordination between monetary and fiscal policy.

In conclusion, he described Monetary Policy as a dynamic process that undergoes occasional adjustments to reflect prevailing economic conditions. In addition, he reiterated the focus of the Bank of Ghana’s Inflation Targeting Monetary Policy Framework as price stability and that all other objectives are secondary to it.