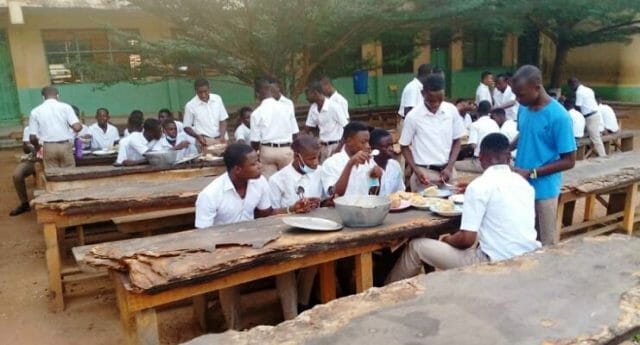 The challenge of food shortage in affected Senior High Schools has still not been addressed fully in spite of assurances by the Ministry of Education.

Though an improvement over the past few weeks, school authorities expect an immediate solution to this perennial issue.

Some Senior High Schools in the Northern, Savannah and North East Regions are yet to take delivery of food supplies promised by the Minister of Education Dr. Yaw Osei Adutwum.

The schools who earlier received calls from the buffer stock company to come for food suppliers were disappointed as no food had arrived.

They have expressed disappointment in the Education Ministry for failing to fulfill its promise.

Meanwhile, a school like the Kumasi Secondary Technical School in the Ashanti Region like others, have seen a slight improvement in their stock after authorities took delivery of some bags of maize.

The school in recent times had to grapple with shortage of maize, palm oil, flour, and sugar.

Headmaster of KSTS, Andrews Boateng is however not happy with the current station.

Andrews Boateng is headmaster of KSTS. He tells Onua News’ Christopher Amoako “we received 20 bags of maize last week. This has improved the situation a bit but not the best. We are still waiting for sugar, flour, and palm oil. In two weeks time or less, we are likely to exhaust our rice stock. So we are appealing to authorities to supply us with the food items in earnest.”

The absence of sugar has compelled the school to re-strategize students’ breakfast intake.

“Because we don’t have sugar, students are not provided with porridge and tom brown. We only give the beverages that already have some amount of sugar content like Milo and the likes. Even with that, a little amount of sugar needs to be added to it but they have to improvise. This is not good because as teenagers, they require sugar,” he stated.

The National Food Buffer stock has assured to supplying the schools with food items by the close of the week.

Meanwhile, the Minister of Education, Dr. Yaw Osei Adutwum after a meeting with CHASS on Sunday, July 10, 2022 assured supplies were going to be made to the affected schools.

Collapse the education system and restructure it – Education Minister told

Food shortage in Snr. High Schools to be resolved by Tuesday – Minister