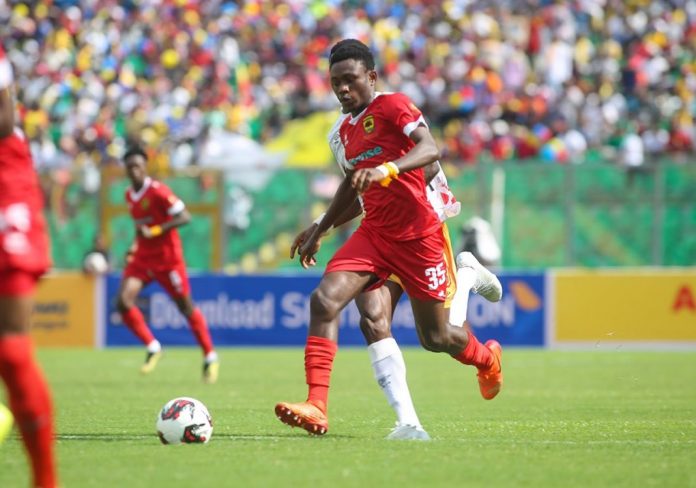 Asante Kotoko got their first point in the league campaign following a 1-1 draw against Hearts of Oak at the Baba Yara Stadium on Sunday, September 25, 2022.

Deputy captain Mubarik Yussif found the net from close range in the second half but Caleb Amankwah nodded home late in the game to force a draw.

It is Hearts’ third consecutive game without a victory in the league this season.

Here are five talking points from the game.

Asante Kotoko started the game with all guns blazing against the Phobians, creating good chances and testing Richmond Ayi on several occasions.

The second half was no different as Isaac Oppong and Mukwala all had chances to score but failed to convert.

Hearts, on the other hand, created few chances.
The goal from Mubarik was a fair reflection of Kotoko’s dominance at the time with Amankwah’s equalizer coming against the run of play.

Seydou Zerbo would feel very hard done by in this match as the boys gave him everything except the much-needed finishing touch.

Coming into the season, fans of Hearts of Oak expected the squad to grab some quick victories and mount an early challenge for the GPL titile.

This has unfortunately not been the case for Samuel Boadu and his men, failing to win any of their first three games of the season.

They lost to Aduana on opening day, drew 1-1 with Great Olympics in the Mantse Derby and have now drawn 1-1 as well with Kotoko in Kumasi.

The technical team will be under immense pressure to win their upcoming games.

Steven Mukwala is not Mbella’s level

Many were left dissatisfied by the exit of prolific Cameroonian striker Franck Mbella Etouga earlier this month to Egypt and rightly so.

Mbella netted an impressive 21 goals in his first season with the Porcupine Warriors, eventually powering them to the league title.

Some supporters from the Porcupine fraternity hoped that the signing of Steven Mukwala, who comes into the league with a good reputation, would fill the big hole.

Unfortunately, the 23-year-old has not done anything near filling the hole. He missed a number of great opportunities to score in the Super Clash, most notably the close-range effort he had minutes after Hearts of Oak equalised.
He has to step up, and fast too.

Kotoko don’t have what it takes to retain the title

The performance of Kotoko last season under Prosper Narteh Ogum was nothing short of sensational. Fans were treated to some beautiful football and well-worked goals as they cherry on top.

They deservedly won the Ghana Premier League title but this season looks bleak. After changing managers from Ogum to Zerbo, Kotoko have lost some key players including Mbella, Imoro Ibrahim and Fabio Gama among others.

Some may say it impacted on their early and shock exit from the CAF Champions League to RC Kadiogo the previous week.

Bad officiating from the referee?

Kotoko fans would have many complaints from this game, especially multiple instances of penalty shouts totally ignored by referee Selorm Yao Bless.

Bless was selected to officiate this big encounter following his excellent performance in the same match two years ago where the two teams drew 0-0.

This time, his performance would likely leave fans of the home team reeling as they would believe that Kotoko should have earned at least one spot kick opportunity.

The game is done and dusted though and complaints would not have an impact on the result.