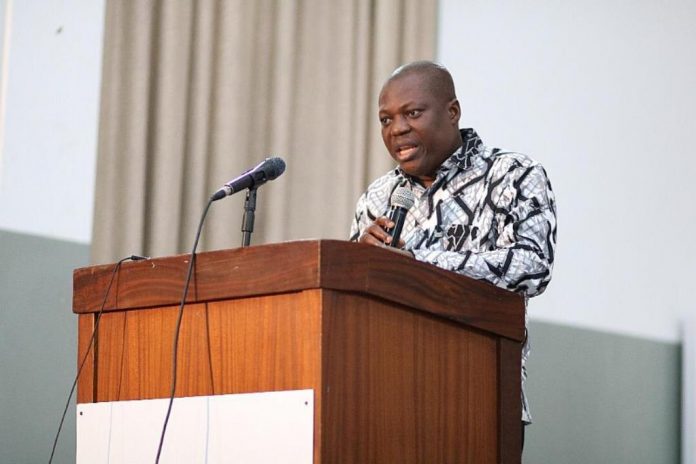 An economist and Dean of the Business School at the University of Cape Coat, Professor John Gatsi has predicted that Ghana’s current fiscal deficit will hit 10.5 per cent as against the government’s target of 9.5 per cent.

Prof Gatsi says his prediction is due to the content of the Article 1V consultation that ended in July this year.

The Executive Board of the International Monetary Fund (IMF) concluded the Article IV consultation with Ghana on July 19, 2021.

Ghana was hit hard by the COVID-19 pandemic. The government response helped contain the pandemic and support the economy, but at the cost of a record fiscal deficit. The economic outlook is improving, even though risks remain, including from the evolution of the pandemic and rising debt vulnerabilities.

The pandemic had a severe impact on economic activity. Growth slowed to 0.4 percent in 2020 from 6.5 percent in 2019, food prices spiked, and poverty increased. The fiscal deficit including energy and financial sector costs worsened to 15.2 percent of GDP, with a further 2.1 percent of GDP in additional spending financed through the accumulation of domestic arrears. Public debt rose to 79 percent of GDP.

The current account deficit widened slightly to 3.1 percent of GDP as the decline in oil exports was partially offset by higher gold prices, resilient remittances, and weaker imports. The Ghanaian Cedi remained stable against the US dollar, partly due to central bank intervention, and gross international reserves remained at 3.2 months of imports. External and domestic financing conditions tightened considerably at the start of the pandemic, but have improved since, and Ghana successfully returned to international capital markets for a US$3 billion Eurobond issuance in March 2021.

An economic recovery is underway. Growth is expected to rebound to 4.7 percent in 2021, supported by a strong cocoa season and mining and services activity, and inflation remaining within the Bank of Ghana target. The current account deficit is projected to improve to 2.2 percent of GDP, supported by a pickup in oil prices, and gross international reserves are expected to remain stable.

The 2021 budget envisages a fiscal deficit of 13.9 percent of GDP in 2021, including energy and financial sector costs, and a gradual medium-term fiscal adjustment which would support a decline in public debt starting in 2024. However, this outlook is subject to significant uncertainty, including from new pandemic waves and risks associated with large financing needs and increasing public debt.

Speaking in relation to the mid-year budget review presented to Parliament by Finance Minister Ken Ofori Atta on Friday July 29 and also on the Article IV consultation, on the Business Focus on TV3 Monday August 2, Prof Gatsi said “The focus of the mid-year review was for the unexpired fiscal year and that is to say what has been captured in the annual budget for 2021 , what has been done, what is yet to be done, how much has been raised and how much we are able to raise to cover August to December 2021.

“What we have engaged in is to rather to trump what we want to do in the medium term to deal with some of the challenges of the Ghana economy. So if you want to look at the fiscal space within 2021, the answer is no.”

He further told host Alfred Ocansey that “As to whether we are able to create the fiscal space for 2022 to 2024 the end of the year will determine that.

“ But if the report that we read from the Article IV consultation with government which ended in July is anything to go by we are expected to have a deficit of about 10.5 per cent in 2022.”